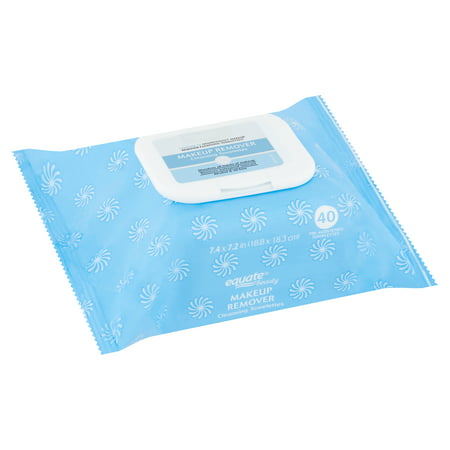 Warning - Choking Hazard - Children Under 3
This toy is not suitable for ages under 3 years. It contains one or more of the following items marbles; small ball; or small parts.
We aim to show you accurate product information. Manufacturers, suppliers and others provide what you see here, and we have not verified it.
Use daily to clean and refresh skin in one simple step. Leaves skin clean and residue free - no rinsing needed.
? Dermatologist, ophthalmologist & allergy tested
? Safe for use around eye area & for contact lens wearers
? Suitable for delicate skin

Equate Beauty Makeup Remover Cleansing Towelettes are plush facial wipes that remove all traces of makeup and leave skin feeling fresh. Makeup, dead skin cells, and dirt can cause pores to become clogged and may lead to breakouts and skin dullness. Use these soft, pre-moistened towelettes for superior exfoliation and to gently dissolve the toughest makeup, including waterproof mascara. After cleansing, your skin will feel thoroughly clean and ready for the next step in your daily skin care regime. They are also ophthalmologist, dermatologist, and allergy tested, as well as alcohol and oil-free. Simply peel the label back to open the package, pull out a towelette, and gently wipe your face, neck, and eye area to remove makeup and impurities. Reseal the label, so your wipes stay as moist as when you first opened them. Say hello to beautiful skin with Equate Beauty Makeup Remover Cleansing Towelettes.

These are amazing. I have been using the Neutrogena makeup wipes for several years. They worked for me. But one day Walmart was out of those makeup wipes so I decided to try the equate brand. I had thought about trying them before, but I had read some bad reviews so I never did... until now. Equate VS Neutrogena 1. Equate has 40 towelettes and Neutrogena has 25 2. Equate is cheaper then Neutrogena There were several times I would buy the Neutrogena brand and the towlettes would be so dry. I don't know if they were sitting on the self too long or what. Never had that problem with the equate ones. They are so moist. Maybe it has something to do with the packaging, the lid snaps shut, which I love. The Neutrogena ones just had a sticky cover you kept pulling off. I wear Revlon Colorstay foundation so I need something that will really take my makeup off before I wash my face. These definitely do the job. They also take off my eyeliner, shadow and mascara with ease. They don't make me break out and I'm confident knowing that they are taking all my makeup off. Also, I bought them earlier this year, and loved them, but then I moved and didn't have a job for 2 months. During that time I hardly wore makeup. Now that I have a job again, I'm using these makeup removing towelettes from equate, the same package I bought earlier in the year, and they are just as moist and effective as before. Don't waste your money for a name brand. These are cheaper, you get more, and they work better!!!!

I have tried $$$ eye make-up remover. This by far is 100% better and saves you a bunch (for lunch !) Easy on the eye, does the complete job with one large sheet ! Wish they sold stock in it !!!

These make up remover wipes gets all the make up off. The fragrance is so light and leaves your face feeling so fresh. Doesn't dry out your face after removing makeup. I wear waterproof mascara and it did the job removing it.

I have sensitive skin & have always used expensive Big Name products . I purchased Equate Make up remover pads in error. Rather than return them I tried them, & loved them. The product is fine & the savings great. I totally recommend this product.

When money is tight these are ok, but they are not as gentle as the neutogena ones.

1. No!
by MarieAllure
00
2. I found the refillable tub dried out before I got to finish half of them ! These stay moist until you throw out the package !
by Methusela1
10
3. Yes!
by drd2263
00
4. The Equate Makeup Remover Cleansing Towelettes are no longer available in a refillable tub.
by RQuinones
10
5. Because everything that is good,they change &amp; it is NOT for the better. They most likely do NOT make them anymore like a gazillion other things that was wonderful &amp; through the decades seen the great stuff go. Quality &amp; quantity &amp; charge&gt;&gt;&gt; MORE! THANKS
by GrannyGrunt
00
6. Absolutely not. They are so painful to the eyes.
by Randi
00
6 Answers

1. They are absolutely save to use daily.
by Texasgirl
00
2. They stung my eyes so I would say no.
by Soraya
00
3. I use these towelettes every day at the end of the day to remove my cc cream, waterproof mascara, and eyebrow gel. I haven&#39;t experienced any irritation. Hope this helps!
by TheLolo
00
4. I have very sensitive skin, the Equate makeup remover towelettes are perfect. I prefer them to the more expensive brands.
by Maureen
00
4 Answers

1. Yes, this is gluten-free.
by CommunityAnswer
00
1 Answer