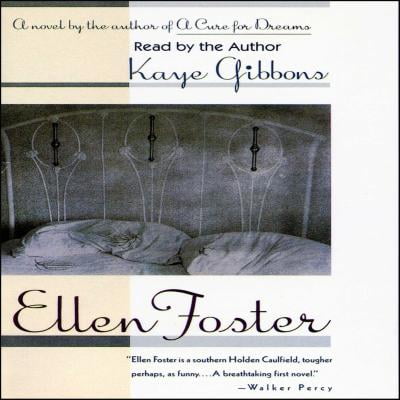 "When I was little I would think of ways to kill my daddy. I would figure out this or that way and run it down through my head until it got easy."

So begins the tale of Ellen Foster, the brave and engaging heroine of Kaye Gibbons's first novel, which won the Sue Kaufman Prize from the American Academy and Institute of Arts and Letters. Wise, funny, affectionate and true, Ellen Foster is, as Walker Percy called it, "The real thing. Which is to say, a lovely, sometimes heart/wrenching novel...[Ellen Foster] is as much a part of the backwoods South as a Faulkner character and a good deal more endearing."

5***** and a &#10084 A heart-breaking story of triumph over adversity. A young girl from an abusive family dreams of being part of the Foster family she sees in church on Sundays ... the kids are all clean and their mother is polite and kind. So she signs her name "Ellen Foster" in hopes of making her dream come true.

There's one major disappointment with this book: the fact that I've had this on my bookshelf for almost 11 years, and I just got around to reading it.Oprah chose Ellen Foster as her Book Club pick on October 27, 1997. I received this as a Christmas gift that same year but for some unknown reason - another more compelling book, perhaps - I never read it. Sure, I glanced at it from time to time, but mostly as it was packed, unpacked, and repacked - and then packed, unpacked and repacked again - and still again a third time, as we moved to three separate residences in 11 years.Eleven is also the age of Ellen, the protagonist of this exquisite novel. Orphaned, Ellen herself is sent packing after the death of her abusive father (which follows her mother's suicide). The novel deals with Ellen's quest for home in every sense of the word - shelter, yes, but also a place of belonging and acceptance. From Oprah.com:Ellen's first eleven years are a long fight for survival. Her invalid, abused mother commits suicide, leaving Ellen to the mercies of her daddy, a drunken brute who either ignores her or makes sexual threats. Through her intelligence and grit Ellen is able to provide for herself, but her desperate attempts to create an environment of order and decorum within her nightmarish home are repeatedly foiled by her father. After his death, a judge awards Ellen's custody to her mother's mother, a bitter and vengeful woman who hated her son-in-law for ruining her own daughter's life and who hates the child Ellen for her physical resemblance to him.Against all odds, Ellen never gives up her belief that there is a place for her in the world, a home which will satisfy all her longing for love, acceptance, and order. Her eventual success in finding that home and courageously claiming it as her own is a testimony to her unshakable faith in the possibility of good. She never loses that faith, and she never loses her sense of humor. Ellen Foster, like another American classic, Huckleberry Finn, is for all its high comedy ultimately a serious fable of personal and collective responsibility.This is a quick read (only 126 pages) and if you have the opportunity to listen to it on audio (as I did), I recommend that version also. Although similar themes have been portrayed in other works, Ellen Foster is an exceptional, compelling and emotional story. As a first novel, this book is a true triumph for the author Kaye Gibbons. As someone who enjoys Southern fiction, I enjoyed this tremendously and look forward to reading more of Kaye Gibbons' work - within the next decade, to be sure.

The book was depressing.....we never know what children live through. This being told through the eyes of a child made it even more sad. I did keep reading, though...what an awful childhood, but she made it through. I think her determination made the book very readable and there were times you could laugh.

[close] I read this book in high school English. The first thing I noticed was it was part of that great literature-pushing device known as Oprah's Book Club, so I immediately hated it with discriminatory flair. But then I opened it up, grudgingly at first, and started reading. The story was so stark and aching that I had to keep reading, hoping things got better, knowing they might not. I was sad to finish the book because it had brought me so much enjoyment. The book was truly an experience, and I thank Oprah for luring my teacher (who later became a guidance counselor, if that tells you anything) to it. And I would like to thank her again, strangely enough, for having her name plastered on the front so I could find it again, as the only details I could clearly recall when trying to find it again involved abuse, racial issues, and the friend who ate clay. Occasionally I catch the show or pick up the magazine in hopes of finding more fodder, but I am not completely sold on the empire as of yet. :)

Ellen Foster by Kaye Gibbons; (3*) Ellen Foster is a small book with a big story. The time it will take to read it is time well spent. This novel provides a reminder that it is really up to each of us to decide how we will respond to what life throws at us. None of us would choose to have Ellen Foster's life. She is given little comfort anywhere. Yet though her lot is hard she has resilience. She is a child who discovers possibilities even in her darkest of times. She doesn't fall victim to self pity which would be easy enough to do, given her life story. She judges people and situations based on the humanity of the people and of the circumstances. In doing so she proves to herself that she can make the best of almost any of life's situations that come her way. Eventually she is able to share her own humanity with others through her behavior & reactions to situations. She becomes able to see the lies that allow racism to exist. She, remarkably for an 11 year old, understands the value of giving and receiving. She finds love and comfort in the simple act of sitting in silence with a friend. I suspect that anyone can learn something from reading Ellen Foster's story.