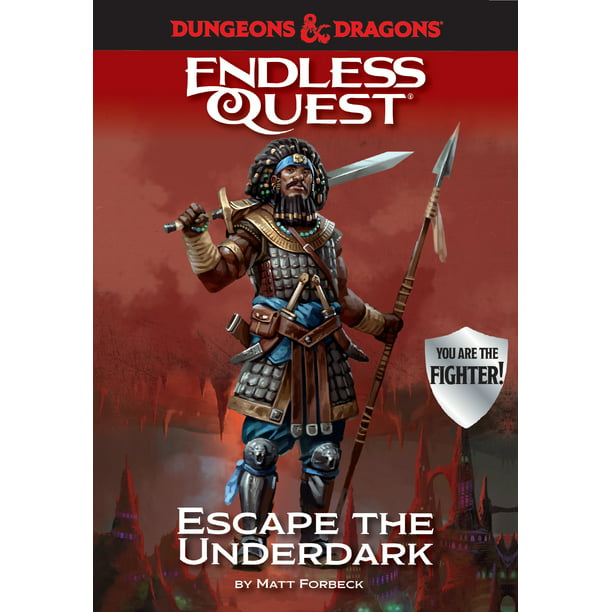 We aim to show you accurate product information. Manufacturers, suppliers and others provide what you see here, and we have not verified it.
"Published in the U.K. 2018 by Studio Press, part of the Bonnier Publishing Group"--Copyright page.Welcome to the Forgotten Realms Endless Quest books, where you don’t just read a fantastic tale. You become the hero — and choose your own fate.

You awaken in an underground cell, stripped of your armor and your sword. Your fellow prisoners inform you that you’re trapped in the Underdark, soon to be taken to the great drowcity of Menzoberranzan and sold off as a slave. But word is that demons are stirring in the underworld’s depth. Perhaps you can use that to break free, fighter.

Like other reviewers mentioned... I, too, remember the choose-your-own-adventure books from the 1980s. They were good... I liked them and my son liked them. I found this new one is enjoyable, too. And because there have been so many years since I've read the older ones, I decided to base my rating of this book somewhat on that of my grandson. It's a fun and engaging read, and we have high hopes for the entire new series!

Reviewed by RaucousRainRaucousRain
Written by a librarything.com customer.
Helpful?
Average Rating:(4.0)out of 5 stars

In the 1980s, Edward Packard's CYOA series flew off the shelves with its gimmick about choosing which page to turn to, based on how you'd like to direct the action. The D&D chain cashed in with its Endless Quest series, a limited version of the idea that stuck with the fantasy, dungeon-crawling theme but still successfully ran to nearly fifty books. This was later overshadowed by competitors like Fighting Fantasy that were more elaborate and introduced character generation, a combat system, etc. Eventually all of these ran their course as improved video games cornered the self-directed adventuring market. My impression is that Matt Forbeck sold a resurrection idea for the Endless Quest series on spec, and now it's being relaunched as four volumes (all written by him) to see if it still has any legs. I've not encountered Mr. Forbeck before, but a bit of research shows he has a strong D&D background so he knows his genre. Reviews suggest he doesn't write well for the adult market, but I think his style suits the target age for this series very well so this may rank among his best work. I caught a logic error and repetition here and there, but the kids won't even notice. All the hallmarks of the original EQ series are back: more focus on story than choices, with long scenes. Given the entertainment factor hinges on intriguing choice and a variety in story outcomes, this hits the mark. As simple as some of those choices are (e.g. "Fight!", which crops up often since you are the Fighter character, after all), a few oddity options present themselves too ("Curl up in a ball", "Make friends with the monster", etc.). You can opt to be a coward almost as often as you can be brave, and a fair percentage of the time that's the better option. The illustrations and in-text violence are just at the right boundary-pushing level for kids, creepy without extending into gross. The original series was a decent entry-level taste of D&D's themes and flavour, and that's echoed well here. I can't imagine this concept will find anything approaching the same popularity as its heyday, but it's the kind of help you want during that long camping trip your kids have to endure without wi-fi access.

Reviewed by CecrowCecrow
Written by a librarything.com customer.
Helpful?
Average Rating:(3.0)out of 5 stars

Reminiscent of the Cho...

Reminiscent of the Choose Ygeour Own Adventure (CYOA) books from my childhood, I was looking forward to a book with a distinctly D&D feel. I've also seen a number of improvements on the CYOA books, including some actual character development or danger (hit points, leveling up, etc.) and was hoping that would be included here. Instead it is a fairly straightforward (and not that engaging) story of escaping a prison in the Underdark. This is probably suited more towards a YA audience than me. But if it encourages any kids to get involved with D&D, it will be worth it. Regular D&D players are better suited for finding a session to join or looking for some of the recent solo adventures created.

Reviewed by smcgurrsmcgurr
Written by a librarything.com customer.
Helpful?
Average Rating:(3.0)out of 5 stars

So I am of two minds about this book. I am really excited because I remember old DnD choose your own adventure books from when I was a kid. They were probably no better written, in fact, probably worse, than this but I felt like I at least remember those as being longer or at least taking longer to finish. I think I read through 6-ish paths in about 1/2 hour. Additionally, I felt like the results of decisions that you made weren't based on anything in particular. What was very often the 'reasonable' seeming path was the one that got you killed the most quickly. All in all, it was a bit of fun but not something I'd return to again and again.

Reviewed by Avogt221Avogt221
Written by a librarything.com customer.
Helpful?
Average Rating:(2.0)out of 5 stars

Being a fan and having...

Being a fan and having read almost all of the old gamebooks(Fighting Fantasy,Lone Wolf, Way of the Tiger-man that was a good series-) back in my teens, I was eagerly awaiting this book. My plan was to read this with my almost 5 year old boy(and that's what I did). But I admit I was let down after doing so. First, it takes about 30 minutes to read through one of the paths given to you in the book. Yeah, that means that you get alot of different paths to finish it, but they are so short that it's not really fun. Second, there is absolutely no fighting system! You read right, an AD&D book without any fighting system!! Even my son asked me why he couldn't fight the buergars. Third, the choices offered are very weak sometimes. Like the way you can escape your cell in the first part, I was all... whuuuuaaat? Fourth, I am not sure who is the demographic for this book. I had to tone down some scenes for my son(scared a bit), so it's not geared toward youngsters, but the paths are so short, and the lack of fighting make this book not suited for teens either. I know I would have been bored to death had I read this back in high school. It's certainly not to get people into D&D either, beside the setting, there is nothing D&D in this. So, who is the target? All in all, meh.(that's the score my son gives it too.) This was an advanced copy of the book for review purpose.

Reviewed by kinwolfkinwolf
Written by a librarything.com customer.
Helpful?