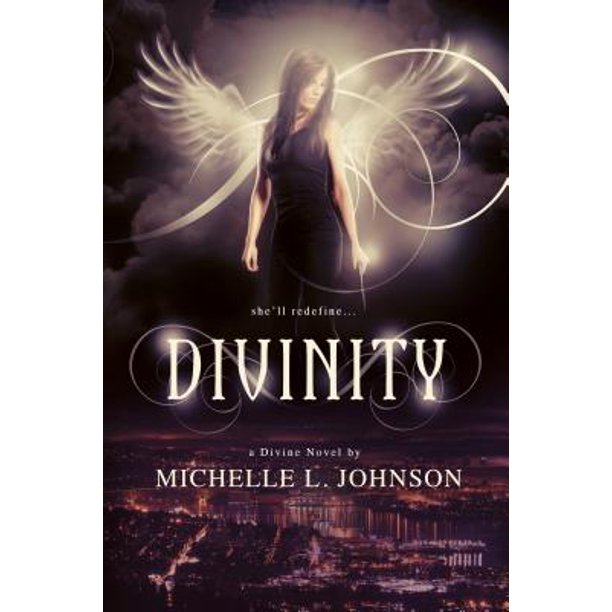 When Julia climbs into a flaming car to save a trapped child, she's left wondering why either of them survived. Then she learns that her father is the Archangel Gabriel, and that she is half human, half Archangel.   With guidance from Michael, the most powerful Archangel, Julia sets out to discover her own history and explore her angelic powers. But her journey is cut short when an evil force, invisible to human and angel alike, tears her world apart.   Now Julia must fight through her despair, harness her newfound gifts, and risk her very soul to stop the A'nwel and protect the family she never knew she had.   What she doesn't know is that Archangels have secrets too.

When Julia climbs into a flaming car to save a trapped child, she's left wondering why either of them survived. Then she learns that her father is the Archangel Gabriel, and that she is half human, half Archangel.   With guidance from Michael, the most powerful Archangel, Julia sets out to discover her own history and explore her angelic powers. But her journey is cut short when an evil force, invisible to human and angel alike, tears her world apart.   Now Julia must fight through her despair, harness her newfound gifts, and risk her very soul to stop the A'nwel and protect the family she never knew she had.   What she doesn't know is that Archangels have secrets too.

Imagine your reaction if the Archangel Gabriel appeared before you and announced that he was your father, and that you’re half Archangel. Not half angel. Half Archangel. Would that create a little upheaval in your world? When Julia Samson, the main character in Michelle L. Johnson’s new novel Divinity meets her father – yep, that’s Gabriel, the Archangel -- Julia is pointed down a path that seems pre-determined, or least Gabriel and the other Archangels think it is. Julia, however, has overcome many challenges in her 30-some years on Earth. She’s not going let angels suddenly tell her who she is and what she’s supposed to do. Johnson has created a great cast of characters, discarding the traditional angel persona in favor of a fresh, less powerful and more human, group of Archangels. They have a non-traditional purpose too, assigned to keep the Earth simply balanced instead of pure and good. That leaves lots of room for error and disagreement among the Archangels, and it’s clear Michael, the so-called leader of the Archangels, doesn’t have much control over his team. We meet Archangels who are stubbornly independent, manipulative, and each working his or her own agenda based on different perceptions of what balance is. There’s something evil in this book, as you might expect, but in Divinity Johnson completely discards the traditional devil and demons as evil concept. She gives us instead a dark and powerful force called the A’nwel that the Archangels have never before encountered, something they can’t see or feel, and something that makes them genuinely afraid. The Archangels are vulnerable, almost human, in their response to the A’nwel. They turn to Julia because only she can see what it is, even if she’s not yet ready to face it. The earthly cast is equally diverse, though not always truly earth-bound, and Julia’s understanding of her life and half-human, half-angel nature forces her to revisit every important relationship in life since birth. Johnson weaves the large cast of characters around Julia as she searches for answers, all wrapped up in a multi-level universe of Earth, a level where the Archangels live that is definitely not Heaven, a mid-level that provides a great setting for several scenes, and wherever it is the A’nwel comes from. The story weaves skillfully back and forth in time as Julia searches through her past, uncovering surprises and gaining fresh hope, while at the same time discovering her powers as an angel and searching for the A’nwel. We also move freely among the levels of Julia’s world, learning to flow between Earth, the middle level, and the higher level just as she does. At the center of it all is Julia, and what the makes the book truly work are the complex relationships that evolve. Julia’s boyfriend Alex, his mother, and her closest friend Charlie, anchor her Earthly presence. Michael mentors her as she learns about her angel side, while her father, Gabriel, remains distant and aloof, confusing and hurting her. Of course, Julia must deal with the A’nwel, even if she isn’t sure what it is or if it’s evil. The hunt for the A’nwel is artfully weaved into the plot as well, and the “final” confrontation forces Julia to act. Exactly how would be a spoiler, though I will tell you the 300-word epilogue will send a shiver down your spine and leave you wanting more.

I would like to thank Spence City and NetGalley for granting me a copy of this e-ARC to read in exchange for an honest review. Though I received this e-book for free that in no way impacts my review. Goodreads Blurb: "When Julia climbs into a flaming car to save a trapped child, she's left wondering why either of them survived. Then she learns that her father is the Archangel Gabriel, and that she is half human, half Archangel. With guidance from Michael, the most powerful Archangel, Julia sets out to discover her own history and explore her angelic powers. But her journey is cut short when an evil force, invisible to human and angel alike, tears her world apart. Now Julia must fight through her despair, harness her newfound gifts, and risk her very soul to stop the A'nwel and protect the family she never knew she had. What she doesn't know is that Archangels have secrets too." Ms. Johnson certainly offers an unique premise with 'Divinity', one this book fulfills quite nicely. Not only is the story fascinating, but it is peopled with some truly interesting characters. The pacing flows smoothly, but not so smoothly that there aren't jolts of excitement, confusion, fear, and joy along the way. Julia has led a hard life, but managed to take it in hand and create something all her own, something she is proud of. But her past has left its scars, and they still interfere in her daily life. Luckily for her, Alex, the love of her life, is more than patient. Between her past and present Julia's character is compelling. She grabs the reader, making you want too know more about her - and that is before the angels even appear to her. Johnson's handling of the angels and their characterizations is refreshing. Rather than being stuffy and uptight, or alternately too cheerful and forgiving, they are each gifted with very distinct personalities. Heaven is not filled with bucolic angels floating around on clouds, or at least not the Heaven we are shown. While it is peaceful, it is also a place of intense work done by the Archangels. And thankfully, each of them is entertaining, to varying degrees. This book carries the reader on a journey that leads from the dark into the light over and over again, with each instance either understandable or relatable, and all germane to the central story. As Julia begins to pick things up the pace of the book goes with her. It is very smoothly combined, the growth of the protagonist and the arc of the story. Based upon the ending I can only hope that a sequel is in the works to answer to question that arises at the end.

The author has created...

The author has created a unique angelic storyline combining the good and evil amongst us with strong character building and a necessary detailed plot. Julia has struggled and has experienced a lot of pain in her life. At her weakest moment, the unimaginable happens and things in her life start to take a turn for the good. Julia is now the proud owner of an up and coming restaurant, owns her own home and has found love like no other... Things come to a halt when she discovers who her father is, the Archangel, Gabriel. The confusion and anger Julia goes through is just the beginning to a new chapter in her life that she has no choice but to face head on without having the time to grieve... a new life that she cannot ignore and must learn to navigate quickly - it isn't easy being half-human and half-angel. As she is trying to work out what this means and how to deal with it, going through the everyday motions takes much effort, but worth the effort since she is dedicated to her employees, and, her beloved boyfriend... But when tragedies strike again and again - heartbreaking moments that brought tears to my own eyes - how can we expect Julia to let her human losses go? But the cause of these tragedies are bigger than everything that has ever existed before. Not even the Archangels know what this evil is, and they are heavily depending on Julia and her new strengths to pull it together and help them not only figure it out, but destroy it too. What was amazing about Julia's story is how the author was able to give us so many minute details and information without going overboard and making it boring - every single piece of information is vital in learning about Julia's destiny, finding this evil presence and in witnessing Julia's progress and transformation. The story is not religion-heavy, however, there is much talk about spirits and faith since we are dealing with Archangels and evil spirits, which is to be expected. Also, the author touches upon some very hard topics, such as child and spousal abuse and suicide. One of the things I loved about this book is the strong importance of family. Julia never had a family and finds one with her boyfriend Alex and his mother. And then later learns that the Archangels have always been there for her. It is quite endearing to see this mentioned over and over again. My one and only quirk is: the ending felt a bit rushed and I wish I would have learned more about this evil 'thing'. But then, if that was done, there probably wouldn't be a huge need for a sequel... This is the perfect read for those of us that have been clamoring to get back into supernatural/paranormal kind of books. *An ARC was sent to me by the publisher for an honest review. All thoughts are my own.