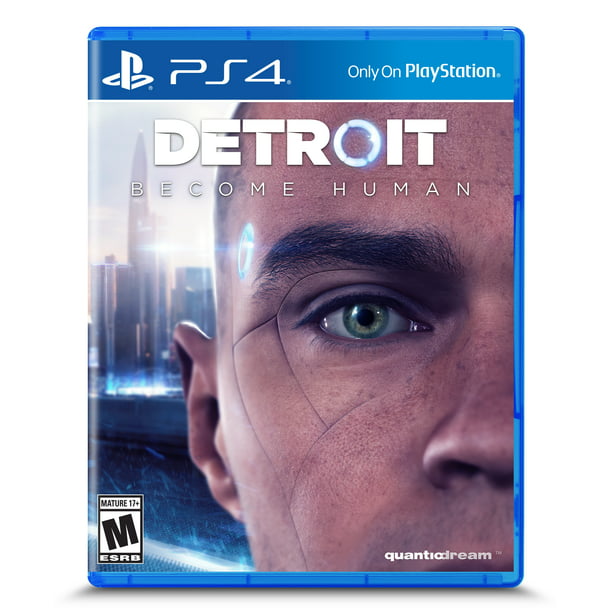 Or get it by Wed, Oct 28 with faster delivery We aim to show you accurate product information. Manufacturers, suppliers and others provide what you see here, and we have not verified it.
A gripping narrative... Mankind, rediscovered. Travel to the near-future metropolis of Detroit - a city rejuvenated by an exciting technological development: androids. Witness your brave new world turn to chaos as you take on the role of Kara, a female android trying to find her own place in a turbulent social landscape. Shape an ambitious branching narrative, making choices that will not only determine your own fate, but that of the entire city. Discover what it means to be human from the perspective of an outsider - see the world of man though the eyes of a machine.

proposition 65 reasons:?? WARNING: This product can expose you to some chemicals, which is known to the State of California to cause For more information, go to www.P65Warnings.ca.gov.?

Omg!!!! I was sort of an emotional wreck when it came to playing this game. I felt bad in so many levels but its only game. This was a steal since gamestop offered it for 59.99. I got it for less than that when it was still popular.

I don't know how to describe this game, but it is beyond awesome. Brilliant story telling, amazing action sequences, and a great plot. It looks and feels more than just a game, it is our future. I like how real it actually looks like in our day in age where we will be seeing Androids among us as part of our society, in our homes, out in public, and so many other places. So much better than some movies where they try to portray what the future could supposedly look like in 50 or 70 years from now when it doesn't even look accurate and rather more exaggerated than what it could really be. I like that they keep it real in 20 years from now because technology is always evolving and they always come up with something new everyday and we're progressing more than you know and that's the real world. I would most and definitely recommend this game. It will blow your mind away. I loved it!!

I like the realness of the game since literally it shows how 20 years from now it could be our world as time progresses. Get it. This game fire asf!

This game is awesome!

This game Detroit Become Human is amazing! There are a million different choices you could make, coming up to endless possibilites. You could play this game over and over and still have a different outcome. I would definitley reccomend this game if you like story based games, however its not all story based, so even if you prefer action this game has the best of both worlds! Its such an interesting game its hard to put down. I was definitley impressed by the quality of the graphics as well. Overall its definitley a good buy!

This was for my grandaughter And she is 100% Satisfied and impressed with the graphics and the game.

Loved this game. Finished it in a day, but it was still amazing!

This review is for the PS4 version. Although I have not played the previous games from this game studio that includes Fahrenheit, Heavy Rain and Beyond: Two Souls, Detroit Become Human, makes me want to go back and explore those games to see what I missed. In a game that reminds me of one of my favorite movies, the original Blade Runner, it has that kind of look and feel that almost makes me feel like I am Decker in a new story. In this case, you play multiple characters throughout the story, including a Decker-like negotiator for the police force. The graphics are well done and detailed with its futuristic landscape of Detroit with a story that really depends on the choices you make with the various characters throughout the game. Having just completed AC: Origins, this game feels slow paced and the game controls a bit clumsy as compared to what I was used to. To be fair though, this is that type of game, similar to Life is Strange, among others, where the game focuses more on choice you own adventure type story more than action and being an open world game. The game has good voice acting and the music and background provide for good atmosphere. The game is a bit linear as you don't really have much freedom to explore other than the immediate area that you are in. A big red “do not go here” type banner keeps you from wandering too far. I am pretty early in the game so far, but I find the story compelling enough to keep me motivated in playing. The game starts fairly slowly though with various mundane tasks to do in the opening scenes. Some camera movement is a bit finicky and as I previously mentioned, find the game controls to be a bit sluggish and clumsy. With that being said, this game is a nice change of pace from my frantic searching for quests in the AC series and it has interested me enough to go back to play the previous efforts from this game studio. If you like the previous efforts such as Heavy Rain or games like Life is Strange, then this will keep you occupied for a while, exploring the various choices and differing stories that those choices result in. 4 stars

It's a fun short game to play if you like story based games. I enjoyed it, but if you like games that are more skill based I wouldn't recommend.

grandson played it but rather play different game

1. There are 3 main characters that you play, there is Connor, Kara, and Markus.
by Mackenzie
Helpful?
2. There are three playable characters in the game. The description of the item mentions one of them, Kara, who is female, but the other two, Markus and Connor, are male.
by Nick
Helpful?
2 Answers

1. Yes you can. All you have to do is go to the options section at the beginning of the menu, select Languages, and scroll down until you see the language Spanish and press it. It will automatically change the audio. Presto. Now you're ready to begin Detroit. Have fun!!
by Seth
Helpful?
1 Answer

1. You end up playing all 3 characters
by SarBear
Helpful?
1 Answer