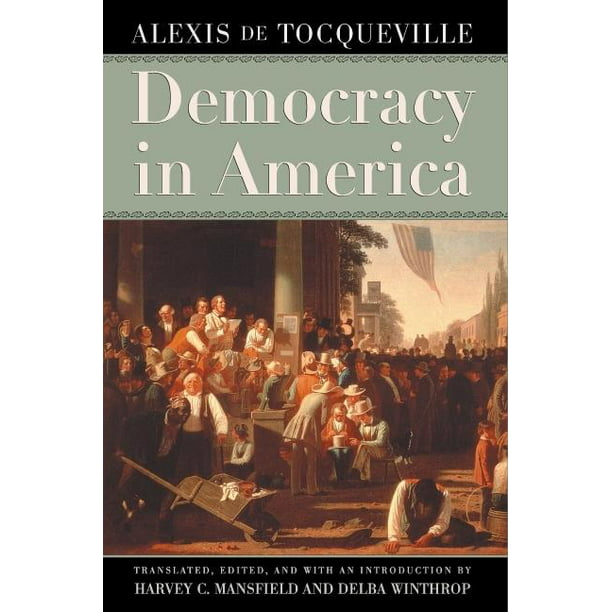 We aim to show you accurate product information. Manufacturers, suppliers and others provide what you see here, and we have not verified it.
Capturing the elegance, subtlety, and profundity of Tocqueville's original work, this new translation offers proof of how essential this masterpiece continues to be.
Alexis de Tocqueville (1805-59) came to America in 1831 to see what a great republic was like. What struck him most was the country's equality of conditions, its democracy. The book he wrote on his return to France, Democracy in America, is both the best ever written on democracy and the best ever written on America. It remains the most often quoted book about the United States, not only because it has something to interest and please everyone, but also because it has something to teach everyone.
When it was published in 2000, Harvey Mansfield and Delba Winthrop's new translation of Democracy in America—only the third since the original two-volume work was published in 1835 and 1840—was lauded in all quarters as the finest and most definitive edition of Tocqueville's classic thus far. Mansfield and Winthrop have restored the nuances of Tocqueville's language, with the expressed goal "to convey Tocqueville's thought as he held it rather than to restate it in comparable terms of today." The result is a translation with minimal interpretation, but with impeccable annotations of unfamiliar references and a masterful introduction placing the work and its author in the broader contexts of political philosophy and statesmanship.

Democracy In America b...

Democracy In America by Alexis de Toqueville Why I picked this book up: I was interested in reading an educated man's thoughts about America and how he saw it functioning, what he thought of the inner workings in his opinion as he came over from France and toured around talking to people from America. Why I finished this book: I was truly hooked from the very begging of this book. I loved it! I wish I had read much more political science, economics, government, etc. when I was growing up but once I found this book it knocked my socks off! It was very fun to read. I think he nailed a whole lot right on the nose and I took pride in how he described America in general and how different it was/is from dictatorships and oligarchies and tyrannical oligarchies. It really opened my eyes and was SO fun to read. Rating: I'd give this book a 4.5 star rating out of 5 stars. It was a new experience for me and am happy I read it.

Reviewed by DrTDrT
Written by a librarything.com customer.
Helpful?
Average Rating:(5.0)out of 5 stars

This is not for the faint of heart. But it is amazing that something written so long ago (and by one so young!) could still have the ring of truth to it. I'll admit, our book club voted to read it then mostly complained about its length, so we divided it up and each person was responsible for about 100 pages. Several of us got so interested that we read more than our assignment, but none of us (myself included) actually read the entire book. I'm thinking, now (writing this on Nov 5, 2008) that I should persevere and read it all.

Reviewed by BookConciergeBookConcierge
Written by a librarything.com customer.
Helpful?
Average Rating:(5.0)out of 5 stars

This is a must have/must read for anyone who is interested in American history. Tocqueville gives a great explanation of America and its government. It is sometimes difficult to read because it was written by a Frenchman many, many years ago but that can be overlooked. Of note, many of Tocqueville's predictions about the state of world affairs turned out to be accurate. Overall, it's a must read for anyone.

The books basis was a...

The book's basis was a nine month visit to America by De Tocqueville in 1831, ostensibly to study America's prison system. It was an interesting time to visit America, half-way between the establishment of the constitution and the Civil War. In the course of the visit he met former president John Quincy Adams, then incumbent Andrew Jackson, Senator Daniel Webster and Sam Houston among others. He traveled the length and breath of a country much smaller than what we see on the map now. Before the Mexican-American War and Western expansion and he visited both North and South: New York City, Boston, Philadelphia, Baltimore, Nashville, Memphis, New Orleans. The book is labelled as both American History and Political Science. De Tocqueville said the first volume was more about America, the second about democracy. The introduction by Mansfield and Winthrop, the translators and editors of the edition I read, called it both the best book on America and the best on democracy. That despite it being written by a French aristocrat--at least by birth although the introduction describes him as a democrat and liberal by conviction. De Tocqueville says in his own introduction he did not mean to write a "panegyric" to America. He's critical, at times presciently so, of America and democracy both, and doesn't pull his punches about how slavery and racism might pull apart the country. He doesn't hesitate to call slavery "evil" and his depiction of the plight of Native Americans is both insightful and heartbreaking. Surprisingly so, not what I expected from a Westerner writing in the 19th Century. Yet despite some sharp criticisms--and it being written by an outsider, a foreigner, the book has been embraced and quoted by Americans both from the Left and Right. It's said to be commonly assigned in political science courses and I wish some excerpts had been assigned in mine, instead of the execrable People's History by Zinn. De Tocqueville in the end strikes me as much more credible, still relevant and much more thought-provoking about democracy and its faultlines--especially the "tyranny of the majority." That's not to say this makes for easy reading. At times I considered giving up on it, slapping a two star rating as too tedious to read. Parts are a slog. I suggest anyone tackling this buy a paperback copy they don't feel hesitant to mark up and highlight and that they take it in short doses. This isn't one of those light, entertaining books. This isn't dessert or junk food. It's a meaty dish; one you chew on and parts can be hard to digest. But the man is brilliant. And it's surprising to me how 200 years later so much resonates in this book and is relevant to contemporary America and its politics. Well worth the effort to anyone interested in democracy or America. At least the first volume is, which definitely deserves five stars for amazing. That first volume was a popular bestseller in its day, the second volume less so, and I can understand that. As De Tocqueville noted, the first book is more on America, and is grounded in a lot of telling observations. Not that it's absent in this second book, but the second volume is a lot more theoretical, and I think a lot of its points are better made in the first part. I also admit I'm not inclined to accept one of his major themes in this second volume, that religion is essential to democracy. And he seems very much off the mark in his contention that American democracy doesn't produce great literature or advances in the sciences. Admittedly, in 1835 when this second volume was published, about the only well-known American writers of fiction were James Fenimore Cooper and Washington Irving. I can't say I much agree with his criticisms of individualism either. That's not to say reading both parts wasn't worthwhile, but less essential I feel than the amazing first volume.

Reviewed by LisaMaria_CLisaMaria_C
Written by a librarything.com customer.
Helpful?
Average Rating:(4.0)out of 5 stars

One of the most import...

One of the most important political works of its time, Democracy In America is still referred to today.

Reviewed by heidiloveheidilove
Written by a librarything.com customer.
Helpful?