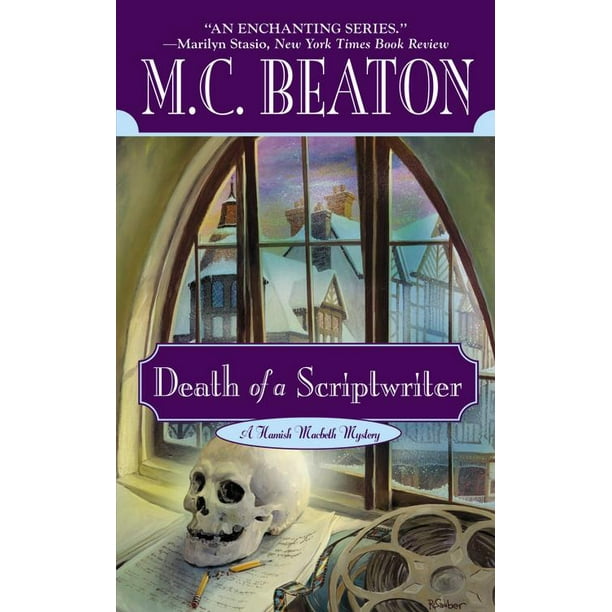 Death of a Scriptwriter

death of a scriptwriter

Interesting change from most murder mysteries, setting is scotland.

Highlands Constable Hamish Macbeth once again finds himself wrapped up in another baffling village murder, this one in the queer Scottish village of Drim. Miss Patricia Martin-Broyd, whose mystery books have been out of print for decades, finds herself delighted to learn that Strathclyde Television Production company wants to film her book "The Case of the Rising Tides", with the hope of landing a spot on Scottish BBC. It will mean Patricia's precious - if dated - books go back into print, something she has long been dreaming. However, little does the writer realize her work is to be sexualized and badly rewritten by scriptwriter Jamie Gallagher. The village of Drim is settled upon as the locale for filming, and village women are vicious trying to land parts as extras in the film. When Miss Martin-Broyd discovers that her precious book has been sexualized and transformed from her original vision, she is furious at the scriptwriter. The author isn't the only one angry at the scriptwriter. Lead actress Penelope Gates promised her husband this film would be a good respectable role, and he is furious when he learns otherwise. There is discontent among the film staff for having to cater to Jamie's whims and some fleeting unease about trying to pull the wool over Miss Martin-Broyd'd eyes and assure her this will be a family friendly act. Between his threats of having people fired, few on the film set feel much sorrow when Jamie Gallagher is found dead, apparently hit on the head. As the filming struggles to continue, Hamish realizes this case may soon be one of his failures if he doesn't find the killer, especially when a second murder occurs. Hamish is thrown off the case by the new lead investigator, but Miss Martin-Broyd implores him to find the killer and because something in her strikes a chord with him, Hamish agrees and seeks to clear Miss Martin-Broyd's name. This is the first Hamish Macbeth mystery I've read. I've long been a fan of M.C. Beaton's Agatha Raisin series, and this series seems to be a winner too. The conclusion to the mystery was not altogether satisfactory to me, but I did love the characters, and especially the protagonist, Hamish Macbeth. I will definitely continue to read this series!

Reviewed by cln1812cln1812
Written by a librarything.com customer.
Helpful?
Average Rating:(2.0)out of 5 stars

Filming in highlands leads to murder. The plot is very weak, very poor character development - nothing like others in this series I have read.

Reviewed by addunn3addunn3
Written by a librarything.com customer.
Helpful?