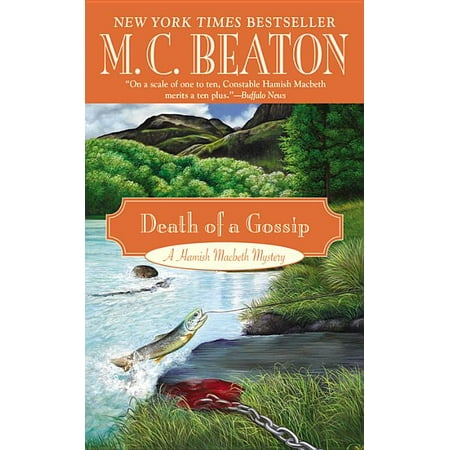 Death of a Gossip

We aim to show you accurate product information. Manufacturers, suppliers and others provide what you see here, and we have not verified it.
Lady Jane Winters, society widow and gossip, is found dead at an angling school in Scotland. Who wouldn't want her shrills silenced? Local policeman, Hamish Macbeth is suspicious. With the inspiring aid of Priscilla Halburton-Smythe, Hamish pursues the case.
Travel to the Scotland Highlands with this classic Hamish Macbeth cozy mystery where an unladylike gossip columnist meets an untimely and watery death. From the author of the Agatha Raisin series.

When society widow and gossip columnist Lady Jane Winters joined the fishing class, she wasted no time in ruffling the feathers--or was it the fins?--of those around her. Among the victims of her sharp tongue and unladylike manner was Lochdubh Constable Hamish Macbeth. Yet not even Hamish thought someone would permanently silence Lady Jane's shrills--until her strangled body is fished out of the river.

Now with the help of the lovely Priscilla Halburton-Smythe, Hamish must angle through the choppy waters of the tattler's life to find the murderer. But with a school of suspects who aren't ready to talk and dead women telling no tales, Hamish may be in over his head, for he knows that secrets are dangerous, knowledge is power, and killers usually do strike again.

M C Beaton, the pen-name of Marion Chesney, is a prolific author of cosy mysteries with two hit series to her name... You may be familiar with Agatha Raisin - a bossy urban sleuth who now lives in the Cotswolds and is delighted to stick her nose into things to keep busy. While I've read the first few ARs and enjoyed them in a throwaway kind of way, I find the character too 'Margot-ish' (A bossy housewife in the BBC comedy 'The Good Life' back in the mid 1970s). Incidentally, there are now 21 titles in this series which Beaton started in 1992. MC's other series which she started earlier in 1985 and has a 27th book due out next year features Hamish Macbeth. The BBC made a TV series in the late 1990s which starred Robert Carlyle as the canny young Scottish policeman - I loved it. It fitted the Sunday night drama slot perfectly with the lovely Scottish locations and gentle humour with a slightly surreal edge to it. There were some great characters, especially TV John - an old clairvoyant who helps Hamish, and Hamish's on/off relationships with the two female co-stars. There was also Wee Jock - the policeman's West Highland Terrier. Undemanding and always entertaining. Will the books live up to that ... I've only read the first so far - Death of a Gossip, but personally I much preferred Hamish to Agatha. The Hamish of the books is different in physical appearance to Carlyle, being tall and lanky with fiery red hair, but the approach to the policework was very similar. It's not that Hamish is terribly lazy, but he's so laid back he's almost horizontal! He has a very laissez faire approach to his work - rather than actually arrest anyone for poaching, he'll let them know that he knows and the poacher will lie low for a bit so the problem goes away - until the next time. His investigative approach is similarly low-key. The fictional Lochdubh is a picture postcard location, nestled on the lochside with a backdrop of rolling hills and moorland. So to the murder ... The Cartwrights running a fishing school, teaching small groups the art of fly fishing with access to normally out of bounds trout and salmon pools and rivers. The latest group of eight very different students have arrived. Within hours of starting it becomes obvious that one of the group, Lady Jane Winders is getting on everyone's nerves. She continues to wind everyone up, so it's not a surprise when she ends up dead in a salmon pool! It had to be one of the other seven students or the Cartwrights whodunnit. Hamish was going to investigate in his own quiet way, but then DCI Blair and his team from Inverness arrive and shove him out of the way, treating him like the yokel plod he clearly isn't. Uncharacteristically, this winds up the normally placid PC ... "Hamish changed into his uniform, admitting to his reflection in the glass that he, Hamish Macbeth, was a very angry man. In fact, he could not quite remember being so angry in all his easygoing life. He was determined to go on talking to the members of the fishing school until someone said something that gave himself away. He was not going to be frightened because it was a murder investigation. All criminals were the same whether it was a theft in the school or poaching deer in the hills. You talked, asked questions, and listened and watched and waited. The hell with Blair." The penultimate sentence from the quote above sums up Hamish perfectly. He does just that, and is rewarded with doing a 'Poirot', getting all the suspects together to reveal the murderer. Obviously, most of the suspects, who were not locals, came out as thinly described stereotypical characters, but those who will crop up again in future books are more strongly drawn. Although angling is of no interest to me, it didn't dominate proceedings too much, and the necessary explanations were woven into the lecture sessions that were part of the course. I liked Hamish very much, and I will definitely be carrying on reading this series when the need for a cosy mystery appeals again. (7.5/10) I bought this book.

Author: M. C. Beaton Published By: Grand Central Publishing Age Recommended: Adult Reviewed By: Arlena Dean Book Blog For: GMTA Rating: 4 Review: "Death of Gossip" by M. C. Beaton was a excellent fast pace mystery read. This is a first Hamish Macbeth novel in a series for this author. "Death of Gossip" was of a famous gossip columnist (Lady Jane Winters) who was a 'pompous, bulling gossip columist' has been murdered at a fishing school and it seems that no one is willing to talk but it looks like it is up to the local constable Hamish Macbeth will be the only one that will be able to get to the bottom of this and unveil the murderer. This gossip columnist was from a big London newspaper gathers information on the potential scandalous behaviour of other guests and manages to make everyone of them wish her dead. And now she was dead....Who had done this? How will this all go down...now, this is where I say you must pick up the good read "Death of Gossip" to find out. I found this read very interesting, funny..... and will definitely will keep you guessing to who, what, how and why of it all. This author will send you on a ride from Scotland, England and New York. "Death of Gossip" was a good murder mystery that was a fast read and yes, I would recommend this novel as a good read.

I only dimly remember ...

I only dimly remember the name Hamish Macbeth from TV listings in the 90s, and I came to this with no preconceptions. I was happy to find myself reading the equivalent of a perfect Sunday night TV murder mystery: cosy, comfortable, traditional, just right! This is an affectionate, if somewhat tongue-in-cheek homage to Agatha: the closed shop of suspects, all colourful characters, and all with secrets they're desperate to keep secret. It's the sort of yarn in which, when someone says 'I'll kill her!' it later makes them a suspect. You get the idea. But Agatha was more sinister, and Ruth Dudley Edwards is funnier. Iain Pears is cleverer. I probably will read more of Hamish Macbeth, but I'll need to wait until I'm in a very particular sort of mood.

The first book in the Hamish Macbeth series is, oddly enough, not really focused on Constable Macbeth. Yes, Macbeth solves the crime, but this book spends more time on the lives and antics of the other characters. Particularly, it focuses on Alice Wilson, a young and rather pathetic woman who has taken a fishing holiday in Lochdubh in hopes of impressing her middle-aged boss. The fishing school is well-known and respected, but it has never seen the likes of Lady Jane Winters, a professional battle axe who delights in making others miserable. When she turns up dead everyone is more or less pleased. This marks Hamish's first interaction with Inspector Blair. We get to see the genesis of their mutual hatred. We also get to see the beginnings of Hamish's relationship with Priscilla Halburton-Smythe. Those who have read later books in the series will note that the main characters have definitely developed since the first installment.

This first Hamish Macbeth novel was fairly disappointing for me. The first chapters of the book involve the obligatory (?) set-up with a group of people thrown together in a situation where personalities are bound to clash. There's a horrible person who you know is going to be killed, and it takes nearly one hundred pages of repetitive character "development" to get to the death that ought to be propelling the whole story. During these one hundred pages (which make up a solid half of the novel), Hamish just sticks his head in a few times. There's more Hamish after the murder occurs, and I love Beaton's portrayal of him. It's the bright spot in an otherwise dull, frustrating book. But even when Hamish is about, his investigation of the murder is almost incidental and his solving it feels a bit "and then a miracle happened." I tried very hard not to expect the book to be the TV series (which I adore), and I have to say that the absence of favorite supporting characters from the show didn't really bother me. This is Beaton's work before it was revisioned, and that's fine. But the pacing, I swear. And why, why, why would you spend most of the book focusing on insipid side characters when you've got such a fascinating main? Why?