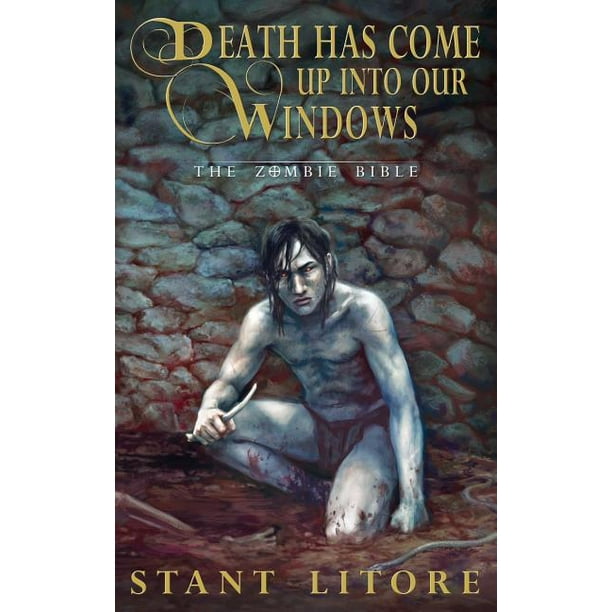 Death Has Come Up Into Our Windows Biblical tales retold as episodes in humanity's battle with the ravenous undead. This series can be read in any order.

It is 587 BC. A vast army lies encamped about Yirmiyahu's city, and a rebellious king has closed the city gates, locking in the living and the dead together. Only one man can see that the dead will overwhelm the city. Only one man can hear the quiet weeping of his God behind her veil in the temple. Only one man will stand against the evils practiced in a dying city.

But the things he sees and the things he must do will call into question every promise he has made, every duty he has sworn - to his wife, his God, and his city.

"The Zombie Bible is philosophy played out in bleak landscapes. It's psychology set to the harsh strains of Prokofiev. Litore's prose is lean and hungry; his characters are faceted all-round like various colored stones; his scenes pulse with blood and life, ring with metal or reek of sweat and undeath." - Marc McDermott

"Litore's vibrant writing rips the lid off of the King James version and reveals to us a world of intense human hopes, dreams and pathos. You've never seen anything like this before." - Richard Ellis Preston, Jr., author of Romulus Buckle and the City of the Founders

The SILVER EDITION is a director's cut of The Zombie Bible. Originally published in 2011, this volume is now being re-released, freshly edited, with new art, and as the author always imagined it. We hope you will enjoy the read!

Stant Litore has come up with a totally unique way of telling a zombie story, re-imagining biblical tales as stories of the struggle with the undead, and God as female. Yirmiyahu is a prophet who loves his God and is tormented by her weeping as the people abandon her and break their covenant. All the while the city is under siege; the army of Babylon outside the gate, the growing number of undead within mean that his city is doomed. When he attempts to challenge both the priests and the king for their actions, the results are horrifying - and heartbreaking. The story deftly entwines the struggle of a good man against the evils of a corrupt ruling class, with the matter-of-fact mentions of the undead; in this world, the undead rise as a matter of course depending on the nature of their first death. The true horror in this book comes not from the zombies, but from what the living do to each other - and what they do to survive; this is as much a pointed social commentary as it is an alternative history tale. Powerful, heartbreaking and very well written - this author just hit my "must-buy" list.

Reviewed by JHSkedJHSked
Written by a librarything.com customer.
Helpful?
Average Rating:(4.0)out of 5 stars

When I first heard abo...

When I first heard about The Zombie Bible, my brain was flooded with a cacophony of thoughts.1. Is this going to be another unnecessary Bible "translation" like the LOL Cat Bible or the Conservative Bible?2. Is this going to cause Fred Phelps to visit Stant Litore carrying "God Hates Zombies" signs?3. This isn't this Zombie Bible is it? 4. Do we really need more zombie stories?Intrigued, I downloaded Death Has Come Up into Our Windows, and settled in with my Kindle and some hot chocolate. Whatever I had been expecting, this was not it. From page one, I was greeted with intelligent, eloquent, academic prose. The tale begins with a note, ostensibly from a historian, giving readers some background of the rise and fall of the zombies. It is here that we learn what it is about zombies that fascinates us so-they reflect the worst of ourselves, that thing inside us we are afraid to face. After a lengthy but necessary introduction, the story begins in proper. Death Has Come up Into Our Windows is based on The Old Testament events of Jeremiah 38, where the prophet Jeremiah is thrown into a well for warning the King of the impending fall of Jerusalem. Kings, it seems are so caught in their own hubris, any hint of impending doom is taken as blasphemy, treason, or both. And so it is, that Stant Litore's telling of the tale finds our protagonist, Yirmiyahu (the Hebrew, non-Anglicized version of the name Jeremiah) tossed into a mud filled well where he is forced to wrestle the undead for the amusement of the king's guards. Clearly, this is not a line by line retelling of the Old Testament story, rather a retelling based loosely on the biblical account. What really drew me into this story is that (like most well-told zombie tales) it is not a story about the walking undead, but a story about humanity. That is not to say it is a zombie story missing zombie gore, for there is gore in abundance; however, there is not gore for the sake of including some blood and guts. Instead, we are presented with a world where we are forced to question exactly who is the antagonist-is it the shambling undead, hungry for flesh or is it the living humans who have created this problem due to their own inequities? While in the well, Yirmiyahu has time to ponder his life, to reflect on his own shortcomings, to battle his faltering faith, and to reflect on what his society has become. Far from the typical brainless (see what I did there?) zombie fare that is in excess these days, Stant Litore has presented his readers a well-written philosophical dilemma wrapped in zombie paper. The result is a mash up of literary fiction and zombie action. This story deals with very real human issues in a smart and sensitive manner and forces readers to look inward while also entertaining the hell out of them. Fans of zombies will not be disappointed by Death Has Come up Into Our Windows, but it is also an excellent entry point for those new to the genre. I am glad that I took a chance on this story and am looking forward to more from Stant Litore. And, in case you're wondering, the answers to my cacophony of questions are: 1. No. But, the LOL Cat Bible is a fun way to kill time waiting for a doctor's appointment.2. Maybe, Fred Phelps & the crew do enjoy a good sign waving.3. Thankfully no, not at all, not even a little.4. Of course we do, why would I doubt this?*Review from Mercurial Musings

Reviewed by danielleK77danielleK77
Written by a librarything.com customer.
Helpful?