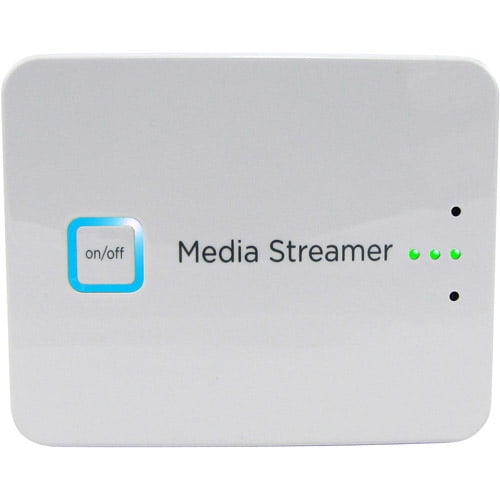 We aim to show you accurate product information. Manufacturers, suppliers and others provide what you see here, and we have not verified it.
The Dane-Elec Media Streamer is your gateway to expanded capacity on your iOS and Android mobile devices, unleash a world of unlimited content with no Internet required. Instantly access your favorite content by simply downloading all of your music, movies, videos and documents on to an SD card or USB drive via this media streaming device. Download the Media Streamer app. On your mobile device, go to network settings and select Media Streamer. Insert SD card or USB drive loaded with content into the Media Streamer and open the app. Let the entertainment begin. The Dane-Elec Media Streamer is equipped with an eight-hour battery and can provide battery backup to your smartphone's and tablets through the USB charge out port. The network media streamer allows up to four mobile devices to simultaneously access the content on the SD card or USB drive and you can quickly download or upload your content between your smartphone/tablet and the SD card or USB drive.
Dane-Elec Media Streamer:
Cannot return by mail
Due to federal restrictions, this item cannot be returned by mail. Before returning the item to your local Wal-Mart store, please be certain that all tanks are completely empty of any flammable liquids, if applicable. See our returns policy for more information.

Store most if not all files from Apple devices.

Incredible device, moves files to or from Apple, Android, and maybe other devices. Plus is a mobile charger. Store apple files on an sd card or thumb drive anywhere. Streamer links up with its own Wi-Fi. Internet bridge as well. Great price and easy interface apps for common devices tablets, phones or other.

So good, I'm going to go buy another

Having had a bad experience with another product (which had built-in storage), I tried this device. I really like the idea of being able to add a memory card and a USB storage device and not be tied down to a built-in storage setup. AWESOME idea to have such an inexpensive device like this and leave the storage open so you can add/remove/swap-out various sets of storage. I bought one of these for my son as well as a 128 GB USB stick and threw in a 16 GB memory card and this unit is working great. Couldn't be happier and I'd highly recommend it to anyone... ......in fact, tomorrow, I'm going to go pick one up myself and use it for when we go on trips and can't get to our NAS.

works great with all devices especially tablets. my whole family has one :)

I enjoy the product. The main reason I purchased it was to save my photos on my iphone to a USB drive and then feel confident about deleting them. I only have a 16GB phone so my memory fills up fast. I also like that I can use it as a charger for my phone.

Meh. I was pretty excited about this product. Now I could have the choice of my movies, without redownloading! Hooray. Well.. I attached a USB drive to the thing, and I *was* able to upload a music video file to it,delete the file from my iPad, and then stream it. So far, so good. And I *was* able to insert a different memory stick, and transfer a PDF and a music file from that memory stick, and access it on the iPad, so that's pretty cool. .. I guess. It's a bit like having an external drive for the iPad, and I like that. But . . . What I *really* wanted to do was to be able to offload my iTunes video files from the iPad and onto the 16gb USB memory stick, and . . . Other than that one music video . . . It doesn't do that. Every time I try, I get a message that the upload is complete, but when I check, the file is there, supposedly, but it shows as having 0 bytes present, and will not play back. So that's not so great. I tried this with a variety of files. An episode of "Rocky and Bullwinkle" iTunes gave me for free. An episode of "breaking bad" I purchased via iTunes. The Sherlock Holmes movie I purchased via iTunes. None of these work. And if there is ANY way to get VUDU content to transfer over, I have no idea what it is. The App I got from the App Store is kind of klunky, and does not provide any way to do this. So, yeah, it WILL stream content, provided you can get the content ONTO it, which you can't, except in rare instances. It WILL allow you to connect to the flash drive AND the internet, using what is called "bridge Mode," so applause to that. I wish it did the rest of what I want. . . at least the iTunes video part, which is what I really bought it for. The VUDU support that is missing. . . Well, that's not quite a deal-breaker, but if I get the iTunes stuff working (which I doubt), seems to me I will not be buying VUDU movies anymore, which is not so happy for Walmart. It was a nice first try for Dane Elec. There was a more expensive option which also supported hard drives, and now I wish I had gone for that instead . .. I suppose I will keep it as a "drive" for backing up iPad files, but really, I could put these in the cloud, as most are pretty small. I *guess* I could keep it as a way to access ALL of my music collection, and that would be pretty cool. It . .. Just . .. doesn't do the couple of REALLY useful things that it is presented to do, and that's too bad . . .

i was happy to find this item as it was exactly what i was searching for. a device that would stream movies to my tablet while i was on the treadmill. i went to the website before buying to find out the range this item would work. they state it is intended for a small room and the maximum range is 72 feet. well i tried to hook this device to my tablet and my android phone, and i am not capable of getting a connection beyond three feet! you have to basically have this device sitting right next to your tablet or phone to stream anything! i say whats the use?

com1, December 9, 2013
Comment from Dane-Elec Product Support -
Hello- My name is Sherry with our Customer Care Group and I have been made aware of your issue with our Media Streamer product. Please accept our apologies for your inconvenience. I have been told that you received a new unit and it is working properly. Once we receive your original Media Streamer our engineering group will work to determine the issue and ensure that this does not happen again. Thank you for giving us another chance and we hope our Media Streamer makes your treadmill workouts enjoyable!<img src="https://s3.amazonaws.com/stratos-logos/logos/NoLogo.png" alt="MobileSolutions" title="MobileSolutions" style="display: block !important; margin-top: 2em !important; border: 1px solid #ccc !important; padding: 2px !important; background-color: white !important;" /> <!--[if ReviewResponse]><![endif]-->
Average Rating:(1.0)out of 5 stars

1. The Dane-Elec Media Streamer is not compatible with any Windows operating system. There is no Windows 8.1 app available.
by CommunityAnswer
2. Hello Bob, Currently there is no Windows OS App. You can still download data from the Media Streamer by connecting to the Media streamer's WiFi signal via your devices settings. Now you can access the web interface by going to a browser and entering 192.168.1.2 into the Browser Address bar. You can read more on this at our support page Knowledge Base article here: https://gigastone.zendesk.com/hc/en-us/articles/204845467-Will-the-Smartbox-Media-Streamer-stream-video-and-audio-files-to-other-devices-like-a-computer-like-a-Windows-or-Mac-laptop-
by Dane-Elec Product Support
2 Answers

1. You should be able to download the latest app from either the Google play or Apple App store. Try Key words MediaStreamer. Currently there is not an firmware update for the device itself.
by Dane-Elec Product Support
2. In the Apple app store or Google Play store. Search Media Streamer DanElect.
by Rod153
2 Answers

1. Hello Tucker, The default password for the Media Streamer is 123456789 if you have changed the password, reset the unit: Boot the Media Streamer once it is fully booted, using a small round object (like a paperclip) press and hold the reset button for 10 seconds Let the unit reboot. Password will reset to default Regards
by Dane-Elec Product Support
1 Answer