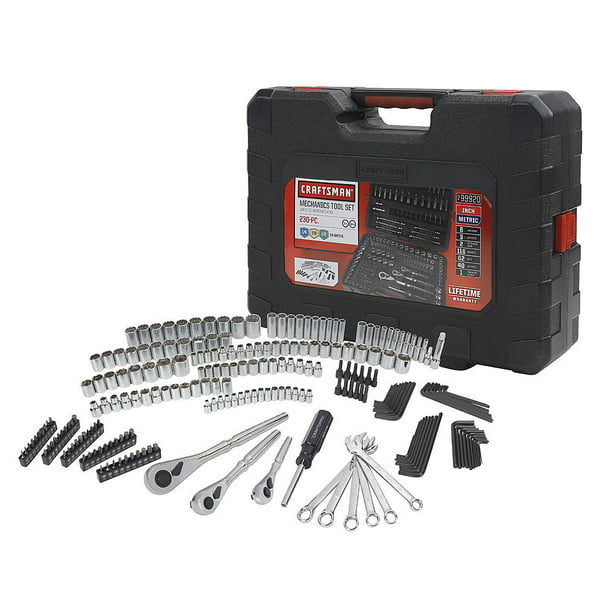 We aim to show you accurate product information. Manufacturers, suppliers and others provide what you see here, and we have not verified it.
Craftsman 230-Piece Mechanic's Tool Set

What others said when purchasing this item
Because I want and I got the money. Also because I bought another one but you're all the mother f. Time canceling my order and I need it
Jordy, purchased on August 20, 2020

It was a great gift . He loves it

I enjoy the carrying case the most.

Just what i needed

It's just what i needed great

Great tool set I bought mine five years ago and I only paid 80 bucks for the set:( now we fast forward a few years and I would love to get a new set sense the set was so nice a lot of the sockets to mine just grew legs and walked off lol but at 159 bucks sears done lost their minds lol. So I decided to buy the Walmart version of this set shh!!! don't tell anyone else that lol Ill leave it to you to figure out which set it is but its around 80 bucks and it looks like the same identical set just with a different name on the ratchets and the box sneaky sneaky Walmart lol. So Im waiting on my set to be delivered to me for FREE!! unlike my craftsman set and I will give a detailed review of this set right here on the craftsman sets review page. Lol

Good tools, you may get a used set though

I bought this expecting a new tool set but the one I received is clearly used and returned. It was zip tied shut, when I opened it I was surprised to see fingerprints all over the kit and a drill bit already inserted in the screwdriver handle. Not a huge deal, they're tools and I'm going to make them a lot dirtier than they are. I just could have bought a used set on FB Marketplace for a lot less. Had this been a gift it would have been really embarrassing, the recipient would probably think I used their tools before wrapping them.