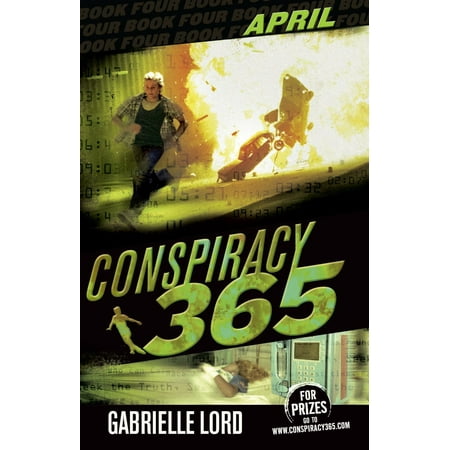 We aim to show you accurate product information. Manufacturers, suppliers and others provide what you see here, and we have not verified it.
Cal has to discover the meaning behind his father's mysterious drawings and decipher the Ormond Riddle before it's too late. First though, he must dodge thugs and evade the police to save his sister's life.Conspiracy 365 #4 - eBook

Warning: Spoilers for April book After Sumo and Kelvin force Cal and the driver, Lachlan, off the road into a shallow creek, Cal is left holding Lachlan's head above the water. Luckily a policeman shows up, and Cal leaves the job to him, but now the media story is that he left the man to drown. Meanwhile, he is chased by the thugs and runs into a live demonstration area, but initially thinks it is Kelvin and Sumo shooting at him. Sumo gets hit by a bullet, which helps Cal get away. He ends up hiding in the trunk of a sweet senior, Melba Snipes, who ends up helping him out by feeding him, and unknowingly, giving him his next hideaway; a boathouse. He meets a kid who tries to steal his backpack Griff Kirby, he sees his identical look alike again, and he relies on the Repro to hide him a second time after he unexpectedly runs into his uncle at the cemetery. Boges continues to help him by providing food, moral support, and updates about the condition of Cal's little sister, Gabbi. When Boges tells Cal that her life support is going to be turned off, Cal sneaks into the hospital, talks to her, and makes her revive enough to flutter her eyelids and convince hospital personnel that she isn't brain dead. Fueling the entire plot is Cal's attempt to solve the Ormand riddle, to which he now has six of eight lines. He still doesn't know whether or not he can trust Winter Frey, but he knows he needs all the help he can get. When the April book ends, he's been tranquilized, and admitted to an insane asylum where someone has created an alias for him; Ben Galloway, and there doesn't look to be much chance for him to escape. As you can see, the series continues to have plenty of action. It isn't well written in that there are places where Cal just randomly decides to do something such as visit the cemetery, but for those readers who just want action, action, action without much character or plot development, this is the ticket. I will continue to buy the series until it either becomes ridiculous, too hard to believe, or boring. So far, it is none of those.