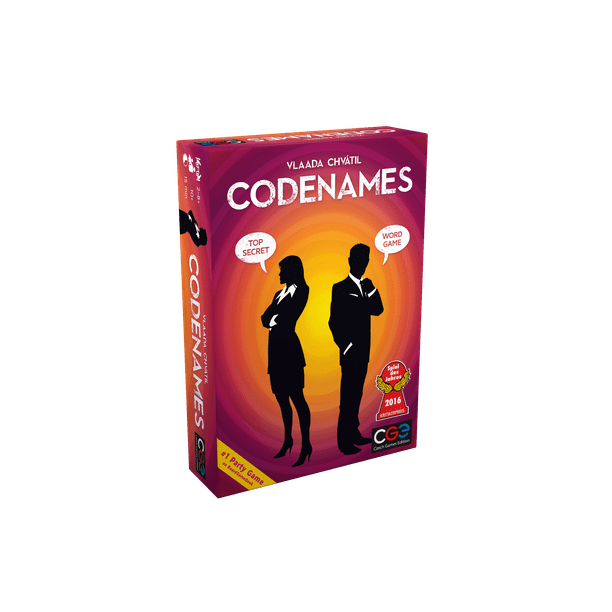 We aim to show you accurate product information. Manufacturers, suppliers and others provide what you see here, and we have not verified it.
Codenames Board Game is a social word game with a simple premise and challenging game play. Two rival spymasters know the secret identities of 25 agents. Their teammates know the agents only by their codenames. The teams compete to see who can make contact with all of their agents first. Spymasters give one-word clues that can point to multiple words on the table. Their teammates try to guess words of their color while avoiding those that belong to the opposing team. And everyone wants to avoid the assassin. This social word game works very well with four players if you prefer to guess without help. Or you can add more players if you prefer lively discussion. There is also a cooperative variant where a single team tries to achieve the highest score they can by playing against the game itself.
Codenames Board Game:

Everyone loves playing this game so far!

Great game to play with other couples or grown up children. I bought it for my new son-in-law and was so much fun I bought it for my husband and I. We've played with friends and our children and all love it. It gets you thinking so it's not too easy but not too hard either. Like you can have a cocktail or two and still be capable of playing!

I gave this as a Christmas gift to my 22 year old grandson. He was excited and talking about it with his sisters and cousins. Thank you. Next time I will order it direct from your website. I had run around to 3 different Walmarts, and they were all out of this game. It was a waste of time and effort on a snowy and cold day for an 80 year old grandma.

We haven't played it yet. I watched videos on how to play it. It looks like so much fun. I was even trying to guess the one word question.

Should have at least six players.

FIun and coolness of a boardgame but in a smallish box. We had good time playing with wide age range.

So much fun. If you play with cheaters it's not fun. No game is fun with cheaters. If your friends can play with a strait face it's great. Easy to learn only sort of sad it isn't a two player. This way we get to have friends over anyway.

Best party game out there! Seriously.

We have played over 20 rounds of Codenames in the last few weeks, no joke. Enough said. =-) We've played with family, with friends, with kids, with elderly folk, with single people, with married couples, with liberals, with conservatives, and a bunch of combinations of each. This game is such a blast and engages everyone. Party games often instill varying levels of engagement based on interest, age, type of game, education level, etc. Not so with Codenames. This type of variety actually enhances Codenames and increases the level of fun. Essentially, you have two teams: red and blue. You have one Spy Master for each team. The goal of the Spy Master is to get her team to guess each of her team's spies for the victory. There is a grid of random, single-word noun cards on the table, visible to everyone. The Spy Masters then have a secret corresponding "code" grid which tells them which cards are associated with which team's spies. Then the guessing begins. Without any hints or insinuations (that's actually really hard!), the Spy Master gives a single word clue with a number (to tell how many word cards she is associating with that clue). One at a time, the team then guesses the words. If they guess right, mark it down and keep guessing. If they guess the other team's spy, the other team gets the benefit and the turn is over. If they guess an innocent bystander, nothing happens, but the turn is over. If they guess the assassin, game over! Being Spy Master is actually a lot harder than it seems but is so fun! You need to concoct a single word that would lead your team to guess as many code words as possible. Seems easy, but you need to be very aware of your opponent's code words and especially aware of the assassin. You'll find more conservative, risk-averse players will got for only one or two code words per turn (slow and steady). I'm very reward-sensitive, so I say "go big or go home!" But I've also been burned by that strategy. =-) When you're on the team and not the Spy Master, be sure to listen to everyone's opinions. So often the loudest or pushiest player would convince the team to go one way when the quiet, 10-year-old kid would be spot on. You also need to be very conscientious of a clue's intended meaning. Does the clue "duck" refer to ducking one's head or an actual duck (the animal)? Does "cool" mean chilly or awesome? Or, if the Spy Master is really good, does it refer to both meanings? I hope Czech Games comes out with an expansion to the first version soon because at our rate, we're going to hit 50 games in no time at all. =-) I dub this as my highest-rated party game at 9.5. It's virtually flawless. The only downside plays into how awesome of a game it is: there are a lot of code word cards included (which can, of course, be shuffled and mixed up), but with how much we want to play, we have blown through the cards quickly.

Great family game. I have 3 teenage boy and they all loved it.

Even though it says for 2 players - the play is greatly diminished in fun. It's more like one person plays and the other person sits there. LOL. booo.