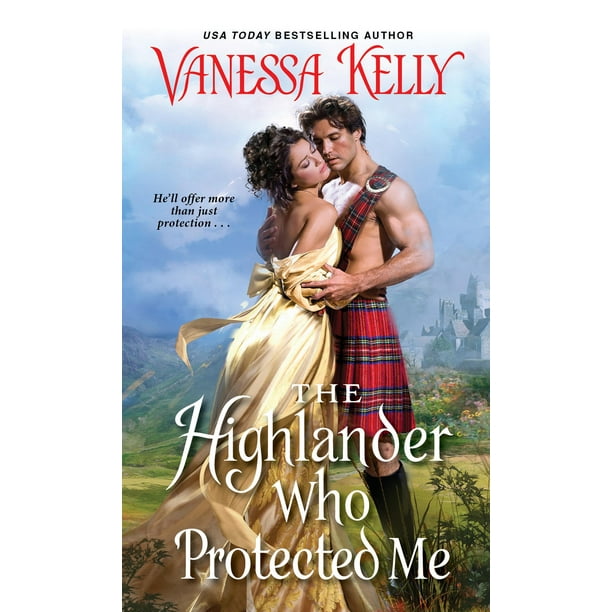 The Highlander Who Protected Me

We aim to show you accurate product information. Manufacturers, suppliers and others provide what you see here, and we have not verified it.
Bestselling author Vanessa Kelly returns with an enthralling new series about the men of the Kendrick clan--and the women who claim their hearts . . . Lady Ainsley Matthews, heiress and darling of the ton, was expected to make a magnificent match. Instead she's hiding on a remote Scottish estate, terrified that her vicious former fiancé will use her pregnancy to force her into marriage. One man can help her--Royal Kendrick, son of a distinguished Highland clan. Though a mistake drove them apart long ago, Royal is the only person Ainsley trusts to protect her baby--even if that means agreeing to never see either of them again . . . Scarred in body and soul by war, Royal suddenly has a purpose--caring for an innocent babe and thereby helping the woman he can't stop loving. But when Ainsley ultimately returns to Scotland, determined to be a real mother to her child in spite of the risk, there's only one solution: marriage. And only one likely outcome: surrendering to the desire that's simmered between them for so long, no matter how dangerous it may be . . . Praise for Vanessa Kelly's Improper Princesses series

"An enjoyable, thoughtful romance." --Kirkus ReviewsBestselling author Vanessa Kelly returns with an enthralling new series about the men of the Kendrick clan—and the women who claim their hearts . . .

Lady Ainsley Matthews, heiress and darling of the  ton, was expected to make a magnificent match. Instead she’s hiding on a remote Scottish estate, terrified that her vicious former fiancé will use her pregnancy to force her into marriage. One man can help her—Royal Kendrick, son of a distinguished Highland clan. Though a mistake drove them apart long ago, Royal is the only person Ainsley trusts to protect her baby—even if that means agreeing to never see either of them again . . .

Scarred in body and soul by war, Royal suddenly has a purpose—caring for an innocent babe and thereby helping the woman he can’t stop loving. But when Ainsley ultimately returns to Scotland, determined to be a real mother to her child in spite of the risk, there’s only one solution: marriage. And only one likely outcome: surrendering to the desire that’s simmered between them for so long, no matter how dangerous it may be . . .

The Highlander Who Pro...

The Highlander Who Protected by Vanessa Kelly is a 2018 Zebra publication. Serious subjects, but genuinely enchanting, delightfully humorous, and deeply romantic! When Royal and Ainsley first meet, an obvious chemistry develops quickly. But, Ainsley is engaged to the Marquess of Cringlewood. However, when Royal realizes Ainsley despises her fiancé and is being forced into the marriage, he makes an impulsive decision that backfires horribly. The scandal causes Ainsley to run away to a remote Scottish estate to hide out for a while- or at least that's the story she and her aunt are selling. The truth is, Ainsley isn't hiding from the scandal- she's hiding her pregnancy. Needing to place her child with someone she can trust, she summons Royal, begging him to take the child and raise her as his own. Recovering from physical and psychological war wounds, Royal finds a new purpose by raising this wonderful child. But, out of the blue, Ainsley tracks him down, explaining she has changed her mind. She wants to be a mother to her daughter and now wishes to marry Royal. Unable to resist the woman he is so hopelessly in love with, Royal agrees, even if the marriage is in name only. The marriage has a real chance, given Royal's incredible patience, but, Ainsley's parents and her former fiancé refuse to back down and let her live her life in peace. I hate that I failed to get in on the "Improper Princess' series, since apparently these characters were a part of that saga. But, this story works great as a stand- alone. I fell for Royal right off the bat. Everyone knows I'm a sucker for the wounded and scarred hero. So, of course, he had that going for him automatically. However, his undying devotion to Ainsley, who would try anyone's patience at times, was simply divine! I enjoyed the banter between Ainsley and Royal, which is sharp, a little snarky, and sarcastic, slightly unconventional, but an awesome change of pace. They traded barbs in such a fun way, with the chemistry always sizzling just beneath the surface. Ainsley's story is a familiar one, and in today's climate readers will immediately relate to her dilemma, the fallout of which, hasn't improved a great deal, I'm sorry to say. But, she is a determined lady, holds her own against Royal's curmudgeonly Grandfather, and her struggles with being a mother are all poignant and easy to relate to. Ainsley blooms and gains even more strength, as she faced adversity, maybe even surprising her own self, while Royal remains an oak, passing every test presented to him with flying colors- which is just the type of hero Ainsley needs. Ainsley has some character flaws, keeping things too close to the vest, for one, which wasn't fair to Royal, but I thought she redeemed herself nicely. This story captured my attention right away. I got caught up in the drama and suspense and had a hard time putting the book down. Thankfully, the story has a Scottish backdrop, which is a personal favorite of mine, and made this story even more appealing for me. But, I must take the time to mention the difficult subject matter addressed in the book. Certain topics can be a slippery slope, needing just the right balance to avoid triggers, and maintain the gravity it requires, while keeping the tone light so the romance is enjoyable. Not an easy task. Kelly handled it beautifully, I thought. I'm glad I got in on the ground floor of this new series. I think, if this book is any indication, it's going to be a good one!! 4.5

Reviewed by gpangelgpangel
Written by a librarything.com customer.
Helpful?
Average Rating:(5.0)out of 5 stars

Delightful! Lady Ainsley Matthews flees her abusive fiancé to the wilds of Scotland. Pregnant and alone she turns to Royal Kendrick for assistance. Royal agrees to raise the baby as his own whilst Ainsley returns to her former life as a leader of the ton. Ainsley however finds herself unable to forget her child. She returns to Scotland despite the risk that her former fiancé might take her child from her. There is only one answer, marriage to Royal. I was absolutely charmed by this story. I smiled at the lively, often sardonic banter between Ainsley and Royal. The understated strength of both lead characters, the tenacity of Ainsley, a suitable despicable villainous member of the ton, some lively characters including the old rascally Angus, Royal's grandfather, made this novel an intriguing and unexpected enjoyable read. A NetGalley ARC

Reviewed by eyes.2ceyes.2c
Written by a librarything.com customer.
Helpful?
Average Rating:(3.0)out of 5 stars

Rcvd an ARC at no cost to author..(netgalley) Well I enjoyed Royal and he was a loyal wounded war hero. Ainsley not so much, at the beginning I have to say she annoyed me and I wasn't really crazy about her, I was trying to take into consideration that she was the product of the ton and that Royal was not really in her class. He was the brother of an earl and a scotsman, so he was just a lowly Mr. He was smitten with Ainsley from the beginning and goes out to save her from her nasty fiance and was surprised with her reaction. Eventually Ainsley did grow on me and I was also heartbroken for her. The good thing is that she had Royal who went out of his way to protect her and love her and eventually give her happiness.

Reviewed by Pelusa41Pelusa41
Written by a librarything.com customer.
Helpful?
Average Rating:(2.0)out of 5 stars

"You know I don't flirt," he said. Then he titled his head, as if considering. The late afternoon sunlight caught the red in his burnished mahogany hair, making it glow like fire. "Except with you." This is the first in the series but there felt like a lot of background I was missing. What I felt from our hero Royal was insta feelings and "ok, sure" from the heroine Ainsley. They seem to have met in a previous book where Royal abducted her, which she liked, didn't like? I really felt like I missed them bonding or getting to know one another. The story structure of this felt off and cobbled together. The first half is Royal sad because he thinks there is no future for him and Ainsley, the middle is Ainsley lying while Royal is a mary-sue, and the last half is Ainsley lying, arguing with Angus (Royal's grandfather), and Royal wanting to sleep with Ainsley while being in pain with his leg injury. This just didn't flow for me, it was a little over four hundred pages and whole sections dragged for me as we went round and round with Ainsley keeping some big secret from Royal, leg pain, and arguing. For Royal having such a large supportive family, I forgot some brothers even existed as their names were mentioned only a handful of times, I do know the twins were little devils to raise though, as it was mentioned over and over. I liked Ainsley's Aunt Margaret but after appearing in the middle part, she is never heard from again. Angus and Ainsley's relationship could have been a nice secondary addition if the fighting didn't last so long and feel so acrimonious and skim over their eventual starting to like one another finally. Since it seemed some of these two's story started in another book, I missed their bonding; there didn't feel like any romance in this story. The pacing was slow and the structure had this feeling like three sections not melded together and characters spinning their wheels for four hundred pages.