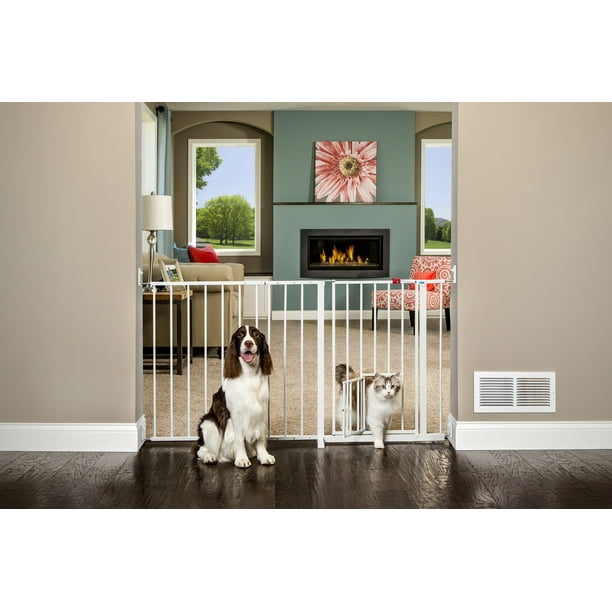 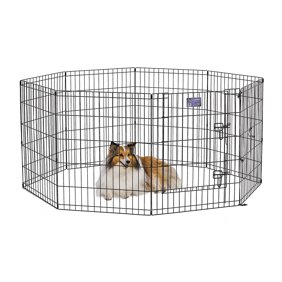 The Carlson Maxi Walk Through Pet Gate was made for large door and hallway openings. It is a convenient, chew-proof way to contain and protect both your pet and home. The all-steel frame of the metal pet gate is designed to expand and configure to a range of wide openings up to 59 wide. Use the wall-mount system for easy installation and a secure fit. The design of this walk through pet gate also features a 10 x 7 pet door, letting small animals pass through while everyone else stays put. This gate can be used to help potty train a new dog, keep your living room furniture off limits or to prevent you furry friend from begging during meal time. The Carlson pet gate features a one-touch release safety lock, making it easy and convenient to walk right through.

Nice and tuff works better than I expected.

My husband and I have horses for dogs "kidding!". Our big yellow female Lab took down our "Expanding Wooden Fence" broken in three places. This one is metal nice and tuff works better than I expected. Con: The screws are too small, have 1/2 inch sheet-rock walls used a stud finder then 1 1/4 phillips deck screws to attach plastic anchors. Con: The door on the gate opening is smaller than the expanding wooden fence but works for us. Pro: At the bottom of the new gate I just turned the gate anchors sideways and attached to the baseboard. Just did some minors custom things for my preference: This new gate has a smaller door on the larger door, I have cats so I removed the smaller door so cats can go through all the time. The smaller door hinges are spring loaded. Last the larger door has a stop so the door swings oneway. I used a pair of vice-grips and bent the door stop up. Now the door swings in both directions. All in All it works!

We have two five-month old German Shepherd "puppies" and needed to contain them from time to time so they weren't roaming the house getting into anything dangerous. The entryway to the kitchen/dining room was 66", so we bought this Carlson Maxi Gate and also purchased the 24" extension. With the extension, the length was perfect and we attached it to the walls. We used longer bolts as the ones that came with it were kind of short and this gate would have some heavy traffic coming in and out of it. The little pet door is very cute and solved our cat problem, so now they can get in and out of the kitchen without having to manage a colossal jump. However, surprisingly, the door is big enough to allow our "puppies" who are the approximate size of your average Collie, to squeeze through. We solved this by tying some string this way and that to make the little door only open half way, just so the cats can go in but not big enough for the dogs to squeeze through. This will work until they're bigger and then of course we can take the string off. The walk-through gate itself is very easy to use. My only issue with it is that you have to pull up on the lever to open, whereas it would be easier to press down, but the design doesn't allow for that. Regardless, it's very easy for anyone to use, and this was one of my initial concerns before buying it because it was going to be used pretty heavily and I didn't want a struggle every time. Works great, and is much less expensive than many of the other gates I've seen.

I am enjoying this new gate so much. It looks so nice between my kitchen and living room. I am a senior with a Jack Russell Terrior and it is working great. Love it.

We are very happy with the gate. It did not take too long (half hour or so) to hook up. I recommend using the supplied anchors with the compression fittings to keep the gate from slipping on the door jam. The lever is a little tricky to use with only one hand when the gate is in the locked position; not difficult using two hands. We found that we can leave the gate unlocked for one-handed operation; it is still secure enough that our dog cannot accidentally open the gate when it is not locked, since the gate opens into the room where the dog is located (it might accidentally open if the gate is installed so that it opens away from the direction that the dog might push the gate when jumping/pushing onto it). The cat door is too large for our dog (Cockapoo), so he can easily walk through it; but it would be fine for larger dogs. The cat gate is much more difficult to open/close, since the pin is a little hard to slide (it might just be ours, though, because we have a another, longer gate from the same manufacturer, and the cat gate works better on it). Overall, we are pleased, and would recommend the gate to others.

Fit a 62" opening with no problems. Installation was very simple with the enclosed template for locating the hanging brackets.

Reviewed by DanielDaniel
Written by a hayneedle.com customer.
Helpful?

1. The door is stays closed with a push pin. If it is disconnected the animal can push the door open, however, if they are on the other side of the gate they might have to use their paw to pull it towards them to get through.
by petlover39
Helpful?
2. No! both door have latches, niether of which would receive an engineerig award.
by liktwolook
Helpful?
3. I removed the latch (simply unscrewed it) and then the small door in the gate is a slightly snug fit. Our little dog is learning to push it open if we don't leave it slightly open.
by CarefulOnlineShopper7
Helpful?
4. It has a spring lock - you either keep it open or keep it closed. We just keep ours open all the time. Actually, at first our cat would only enter/exit through the bars instead of the door.
by PLWalmartShopper
Helpful?
5. You can leave the little door open or latch it closed
by graczyk
Helpful?
6. You can open the small gate (has a latch). When it is unlocked, you can either leave it open or I guess the dog could go out by pushing it open.
by An anonymous customer
Helpful?
7. no, you have to actually pull a knob and let your pet through
by Smilesforchris
Helpful?
8. you have to open the doors - we have to leave them open so the animals can get in and out, but if you don't want them outside they shut tight and stay inside.
by Ponyup
Helpful?
9. No, it is either open or closed. Uses a set screw that engages when it is closed.
by dranow
Helpful?
10. No, the pet can't open it if it's closed. It's held shut by a small spring-action bolt that you pull to open.
by rogan5
Helpful?
11. Small pet door within the larger gate door. The small pet door has a spring loaded locking catch. You must either leave it open all the time /or/ open and close it every time /or/ remove it completely so smaller animals walk through all the time. I remove my small pet door. Hinge rod in the smaller pet door is spring loaded. I drilled a small hole above the rod then inserted a straightened paper-clip to push on the rod to remove the small pet door. Now smaller animals walk through all the time. Also it's easy to re-install the smaller pet door if needed.
by 8964
Helpful?
11 Answers

1. I do not recommend this for any small dog breed.
by rynelle
Helpful?
2. The bar are approx 2 1/2" apart. We have a small Yorkie (6lbs.) and has not been able to get thru.
by liktwolook
Helpful?
3. The opening between the bars on the gate is 2-5/8".
by CarefulOnlineShopper7
Helpful?
4. 2.5" between bars. Gate area-2.25" between bars.
by An anonymous customer
Helpful?
5. 2 1/2 inches - i bought this for a yorkie and he can get through the bars( he`s four pounds)
by Smilesforchris
Helpful?
6. yes she can get caught - we used chicken wire on the outside where she can't get to it and didn't hurt anything
by Ponyup
Helpful?
7. I measure them at 2 and 5/8". So a really small dog, or a cat, might be able to squeeze through.
by rogan5
Helpful?
8. Not effective to keep out smaller kittens and/or mini-dogs. Bars are 2 1/2 inches apart. Sorry! To get this to work would require purchasing additional material like a plastic or wire mess to zip-tie to the gate.
by 8964
Helpful?
8 Answers

1. The actual gate is 16" wide. The doggy door within the gate is 8" x 10".
by sdbluelake
Helpful?
2. 15" to 16"
by liktwolook
Helpful?
3. The actual opening with the gate opened is 15.5"
by CarefulOnlineShopper7
Helpful?
4. 16 to 18"
by An anonymous customer
Helpful?
5. a little over 7 inches dor the "doggie door" and 13 inches for human gate( if you only are using 45 in opening- if you cut the "extra inches off gate,you woul gain 2 1/2 more inches in width on human gate) if you are using with 65 inch opening,then the "human gate width is 15 1/2 inches wide
by Smilesforchris
Helpful?
6. 15 INCHES
by ROCKYSURFER
Helpful?
7. the walk-through part could actuall be a little wider, in my opinion. It's only 15" wide.
by rogan5
Helpful?
7 Answers