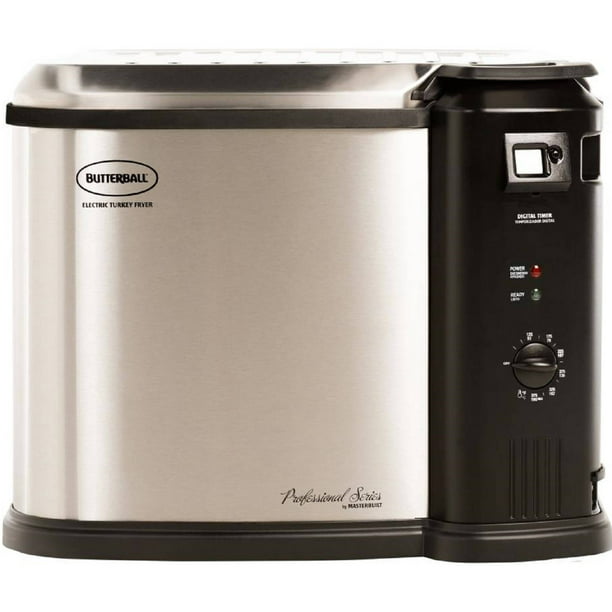 We aim to show you accurate product information. Manufacturers, suppliers and others provide what you see here, and we have not verified it.
Features

Fry, steam, or boil your favorite foods with the Butterball XL Indoor Electric Turkey Fryer by Masterbuilt. The fryer uses 1/3 less oil than traditional fryers and can cook up to a 20 pound turkey in just four minutes per pound. You can also fry a variety of other foods including french fries, chicken, fish fillets, and hot wings. Use the boiling function to boil corn on the cob, shrimp, pasta shells, and more. Clean-up is easy with the built-in drain valve and dishwasher safe components. Our fryer is designed and tested to meet commercial standards and is the safe way to fry turkey. Bring home the ease and convenience of the Butterball XL Indoor Electric Turkey Fryer.

proposition 65 reasons:This product contains chemicals known to the State of California to cause cancer and/or birth defects or other reproductive harm

This product contains chemicals known to the State of California to cause cancer and/or birth defects or other reproductive harm www.p65warnings.ca.gov 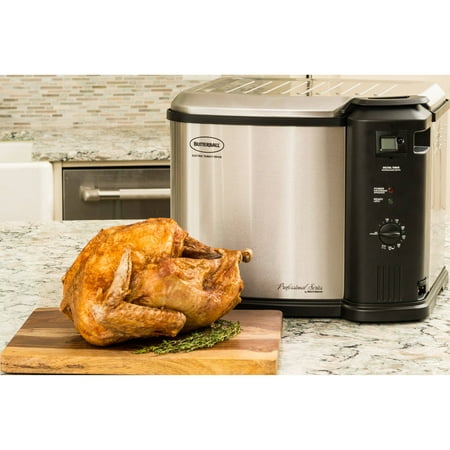 I've only got to use this fryer one time but have been completely satisfied with it. The best part of the fryer (except for the delicious turkey) is the VERY easy cleanup. Everything can go in the dishwasher (other than the heating element). I'm looking forward to using this fryer for Christmas.

I was hesitant when my husband said he wanted to fry the turkey this year! I was so pleasantly surprised with a moist dinner for my guest! The photo is here! It was easy to set up and clean afterwards too!

Item is great!!!!! Turkey was great for thanksgiving!!!!! Chicken was great! This was just the best investment ever. Me and my family was happy for sure.

I swear I will never bake another turkey!!!!!!

I got a recipe off youtube that consisted of injecting the turkey with cajun butter, putting a garlic herb butter under the skin and a cajun dry rub. I cooked a 14 lb turkey in 56 minutes! Set up/clean up was a breeze. The turkey was moist inside and golden brown and crispy outside. It was delicious and there was only a carcas left in the end!

The turkey is all that is advertised. Cooks the turkey at about 4 mins/lb. and the turkey is golden and lightly crisp, succulent and tasty. If you're thinking about it for the upcoming holidays - pull the trigger and get it! It's an investment that is worth is weight, compared to homemade fryers or less agile models. I definitely recommend it. It is dummy proof and user friendly!

This is everything I hoped it would be and so much more. I worked perfectly for our Thanksgiving turkey. It was by far the BEST turkey I have ever made. I was able to get it delivered just in time for Thanksgiving. Quick and easy order and delivery.

A LOT OF NOTHING

Too much of an ordeal. Like the turkey in the oven the best and being able to control the basting on the skin.

The digital timer does not work, not that I would use it, but it's dead. Everything else worked, however the instruction booklet is lacking. No where in the instructions on set-up or operating does it mention that you should not use an extension cord because it drains too much power ... except in the trouble shooting section which you do not read unless there is trouble, like taking a long time to heat up. But of course by the time you read it there the unit is already very hot and cannot be moved close to an outlet and everyone is waiting for turkey. It's sort of like bomb defusing instructions that read; cut the blue wire .... after cutting the red wire.

Did the job but a bit disappointed

Used the fryer only once but had three 12-14 lb turkeys to fry. The instructions stated it could take up to 45 mins for the oil to reach cooking temp. I planned for an hour & was glad to see it was closer to 45 mins. Once I put the first turkey in the fryer, it never got back up to full temp. I have always fried turkeys at 3.5 mins/lb. I had to go a little over 4 mins/lb to get the turkey done. Had the second turkey prepped & ready ,but had it took the cooker about 30 mins to get the oil back up to temp. Cooked the second turkey was done at 4 mins/lb. After another 30 mins, the oil still had not come back up to full temp, but with time to dinner getting close I went ahead & put the third turkey in. This one took a little over 4 mins/lb to get to proper internal temp. I like the ease of use & the fact that you don't have to contend with the weather outdoors. It presents no problems if only cooking one turkey. When cooking multiple birds, you have to plan for a lot of extra time between cookings to let the oil recover temp. My propane fryer come back to temp within a few minutes of putting in a cold bird. I do have to watch & adjust the burner to keep the oil from overheating on the propane cooker. You don't have to do this with the electric fryer. Bottom line. It does work as advertised. It is convenient & easy to use. Just be aware that it does take significantly longer to cook multiple turkeys than a propane fryer.

Questionable, whether to recommend to a friend

I bought this fryer, in the hopes of frying a turkey, in my kitchen. When I received it and removed it from the box. I was initially impressed, with it. However. Once cleaned and ready to plug in? I found the cord, was only 30 inches long. Add to that, it connects, in the front of the fryer. This made it impossible to plug in, on any kitchen counter. After placing it on the floor near an outlet, Its size, made it dangerous, for pedestrian traffic. As it needed to be placed, away from the wall. After adding the oil and turning it on. The preheat cycle, took 45 minutes. Once this was all done. The frying portion, of the preparation, was exactly what they say. 10 pound turkey= 40 minutes. In my estimation. The cord, could have either plugged in from the back, or made longer. Never the less. The turkey was crisp on the outside and happily, very juicy, on the inside.

If you would like to share feedback with us about pricing, delivery or other customer service issues, please contact customer service directly.
1-3 of 6 questions
by Mlind1122October 24, 2015

1. In the box you&#39;ll find the unit/case, a short breakaway cord, a heating element, a tub/frying vessel that fits into the unit, a frying basket, a handle to lower the basket, and a spout to assist in draining the oil. Basically, it has everything but the oil and food!
by An anonymous customer
2. yes they supply everything to make it very safe
by An anonymous customer
2 Answers

1. I have not looked at the specific model numbers but there are two distinct models. the $99 model holds a turkey max 14lbs which is pretty worthless. If you look at the box the xl unit says max 20 lbs and I bought mine online for $129.
by An anonymous customer
1 Answer