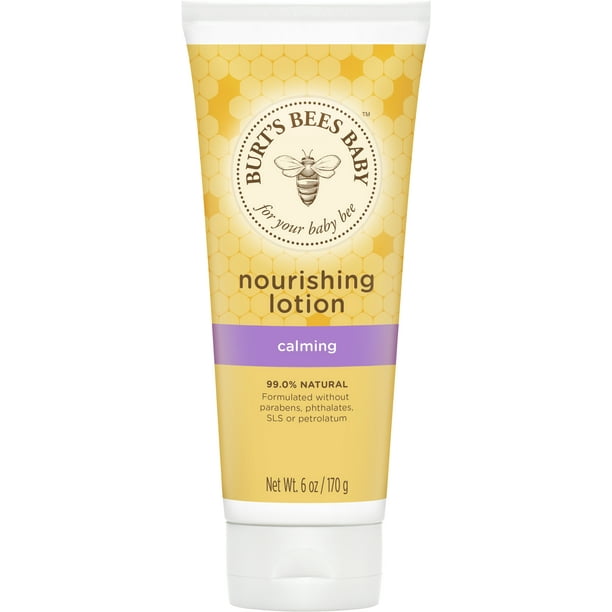 We aim to show you accurate product information. Manufacturers, suppliers and others provide what you see here, and we have not verified it.
Complete your bedtime routine with this gentle Burts Bees Baby Nourishing Lotion, Calming. This 99.0% natural baby lotion is infused with a subtle and relaxing aroma of lavender and vanilla and features shea butter to soften and moisturize your babys skin. It is pediatrician tested and contains no phthalates, parabens or petrolatum. Keep this handy tube on your change table for convenient baby care. Discover natures best with Baby Bee from Burts Bees.

It smells so good, I got two bottles for my 3 and 6 year old because they still have super sensitive skin. I love the Burts Bee line, and their baby products do not disappoint.

I not only used this calming nourishing lotion on baby but on myself too! I have to say that I actually prefer it to my own lavender cream that I use at night time from the bath and body store! This lotion is not greasy and it smells amazing!!!! I think that there might even be a hint of honey in there! I fell like I even slept better and baby too! I give this a two thumbs up! :)

Reviewed by CorinaPJCorinaPJ
Written by a walmart.ca customer.
Helpful?
Average Rating:(5.0)out of 5 stars

Baby loves the softness. We use after every bath time before beds

We bought this yesterday for our six month old who has been sick with the flu. We loved it immediately! The lotion goes on so smooth and quickly absorbed into his skin. The scent is so calming, and on the "warm" side.. not garish or cool or bright like some immitation lavender scented baby products we have tried before. The vanilla warms it up like a sunset. Looking forward to our goodnights! The only problem is that the baby and I may end up fighting over who gets to use the lotion first!

my nephew has Atopic Dermatitis and lives in S.Korea. i buy 4 or 5 of this lotion once a while when he finishes using this lotion. his mom loves this lotion because this lotion cures her son's atopic dermatitis completely. these products are three times expensive than in United State, but still, it is so popular for dry skin. if your kids have dry skin, you should definitely try this lotion. [This review was collected as part of a promotion.]

I've spent a mini fortune on baby bath products these are by far the best. I will. ot venture out anymore !

Used to massage this into my little one's skin.. soaked right up and prevented any winter dryness! [This review was collected as part of a promotion.]

Love the smell! Its a little runny/thin but otherwise great!

Not as bad as the other new lotions

I've tried the "new improved" original baby lotion (ICK! Smells revolting) and the "new improved" Milk & Honey (plastic smell but I've gotten used to it) in addition to the original versions of several (heavenly, sweet smells in all of those), and while this isn't to par with the old versions, this isn't bad. The texture's very nice and I find it very moisturizing. The scent does have a slight plastic smell, characteristic to the new Burt's lotions, but the overall smell is quite nice and despite not liking lavender, I rather like this and will probably buy it again some time.

Was hoping for more.

Let me start off by saying that I am a huge fan of any company that uses natural ingredients and that is cruelty-free. So I really wanted to love this calming lotion from Burt's Bees... It is perfect for anyone with sensitive skin (young or old) or that has any allergies. Unfortunately, I can't say that I loved it. The main issues were that I did not like the scent and I did not appreciate the fact that it left a sticky layer on my skin. It does go away when it dries, but it still doesn't feel good when applying it. This was not what I was hoping for. I still give it 3 stars, as I think it deserves it for being such an awesome company.