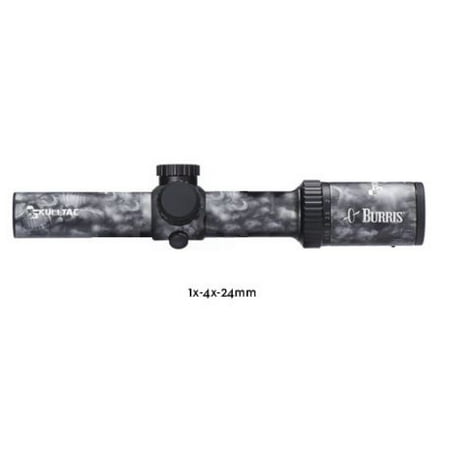 We aim to show you accurate product information. Manufacturers, suppliers and others provide what you see here, and we have not verified it.
Burris Skulltac 1-4x24mm Illuminated Mta

I spent a long while deciding between the Burris MTAC, LRS, and SKULLTAC 1-4x models. I have a military background, and was looking for a replacement for my EOTECH holosight. I do my research to a point that I know every last bit of the products I'm looking at. This SKULLTAC scope is beautiful in person, and the extra reach of 2x 3x let alone 4x is excellent. The thing that made me choose this optic over the others (which I auditioned in person) is that while at first, I was not a fan of the reticle, I kept coming back - finally auditioning the LRS vs MTAC/SKULLTAC vs a Primary Arms 1-6x, vs the Leupold VX-R patrol, and Leupold VX-6 in 2-12x. Ultimately these Burris optics are some of the clearest glass I've seen, and compared with the firedot reticle of the Leupold, I ultimately came to appreciate the faster 1x target acquisition that the SKULLTAC uses. It is somewhere between 2 and 3 times faster for me to acquire targets in CQB using the Burris doughnut reticle. After some significant research and studying the reticles for hours on end, I'm happy to report that Burris got it right with the doughnut. The 300, 400, 500, and 590yard dots are the perfect size to engage long range targets, while the primary "big dot" has all the advantage of very fast target acquisition and enough accuracy to nail targets at 100yards consistently. While comparing field of view, the Burris again wins - the 1x field of view makes it look like you are peering through a wide ring with thin bezels, at approximately 100 Linear FoV it is awesome for situational awareness. Compare that to 75ft on the competitors I mentioned, and you will see why this optic is superior in most every way. I appreciate the tactile feedback, turret style reticle illumination knob, that has on-off points in-between settings. After everything else, maybe I'm a control freak, but having the physical knob for illumination is what ended up selling me on the SkullTac. I also like the capped elevation/windage turrets with re-settable zeros. I prefer to use holdovers in the reticle, but that's probably because I've never had reset-able zero on the elevation/windage (I'd use some pink nailpolish to mark me zeros - but now I don't need to steal my wife's nail paint anymore). Ultimately you should run the specs of each Optic you're looking at. You will find that the Burris hangs in there with all of the specs from much higher and some lower priced Optics. The Burris glass will be the clearest and most HD glass you'll find at this price point and it will rival glass from the premium brands at a fraction of the cost. It should be noted that the MTAC/SKULLTAC line does weight in at 14.5oz naked, however I think this is a build quality thing, so when you do audition these optics, pay attention to the quality here. Burris has made a solid, well built winner. I know my 3-9x Burris Fullfield has served me well on all of my hunts, and I have no doubt that this tactical optic will serve my tactical needs just as well.

I got this Saturday put it on went to tbe gun range sunday and within 6 shoots had it zero in. Im starting to shoot 3 gun and need good glass i had others but nothing like this. What eles can i say go buy one for yourself and will see

Did the research, bought this scope ,and am very happy I did!! Love the look , feel and function of the Burris skulltac. Only down fall is that I didn't get the combo. I also purchased the Burris p.e.p.r mount a few days later and mounted it on one of my NYS compliant AR's. Right out of the box I barely had to adjust it. Glass is very clear, love the illuminated reticle , and the eye relief it great. I really like being able to use it as a red dot with both eyes open for close shooting, and then being able to zoom in for longer shots,also put in on my 458 socom and it holds zero like a champ....

My wife and I travelled 70 Miles to a sporting goods store to see this scope and compare it to others since the local selection was poor. After spending a lot of time comparing the Burris Skultac to several others and a couple of "House" labels, we both discovered that the Burris reticle with the fairly wide Circle was easier to aquire quickly, especially in low light, and the clarity and lack of distortion and off color tint was superior to many and, at least to my old eyes, fully equal to the more expensive scopes we looked through. A big plus getting the Fastfire lll and mount included. The system mounted in seconds to my M&P 15 ll and very quick to Zero. Also, lots of adjustment range of the eye piece to compensate for my astigmatism and aging

Written by a customer while visiting burrisoptics.com
20