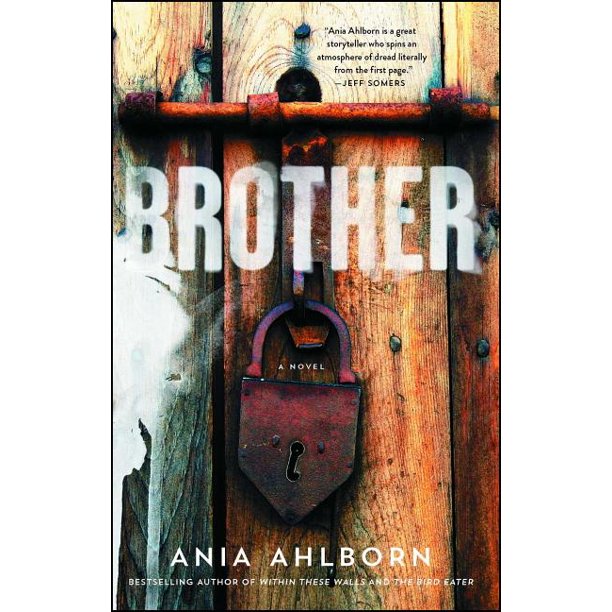 Deep in the heart of Appalachia stands a crooked farmhouse miles from any road. The Morrows keep to themselves, and it’s served them well so far. When girls go missing off the side of the highway, the cops don’t knock on their door. Which is a good thing, seeing as to what’s buried in the Morrows’ backyard.

But nineteen-year-old Michael Morrow isn’t like the rest of his family. He doesn’t take pleasure in the screams that echo through the trees. Michael pines for normalcy, and he’s sure that someday he’ll see the world beyond West Virginia. When he meets Alice, a pretty girl working at a record shop in the small nearby town of Dahlia, he’s immediately smitten. For a moment, he nearly forgets about the monster he’s become. But his brother, Rebel, is all too eager to remind Michael of his place…

Review copy Ania Ahlborn is the bestselling author of the horror thrillers Within These Walls, The Bird Eater, The Shuddering, The Neighbors, and Seed, which has been optioned for film. Born in Ciechanow, Poland, she lives in Portland, Oregon, with her husband and their dog. For more, visit the author online at AniaAhlborn.com. This is the second book I've read this year from Ania Ahlborn, having read Within These Walls back in April and now Brother. Both works are fine examples of literary horror and each is well worth your time as a reader. Brother is the disturbing story of the Morrow family who live deep in the heart of the Appalachians, in West Virginia. This is a family that has managed to take all of the fun out of dysfunctional. There is definitely a strange family dynamic at play here. Abusive parents, and siblings that are just as bad. "Folks like the Morrows didn't have much. They got by living off the land." This is a quote that goes much deeper than what it seems on the surface. At the core of the story is Michael, the youngest brother among the four siblings. Michael was not born a Morrow, having been abducted when he was just six-years-old. Told he was abandoned by his family, Michael has grown into his teen-aged years immersed in the horrors of the Morrow household. Brother is a story of complex relationships, with fully developed characters, that left me beaten and fully drained by the book's end. As all of the secrets of this tale were reveled, I felt as if I was about to crumble, so powerful were the images in my mind. It left me asking how much can one person take before they just snap. I would love to see this on the big screen some day. Another book that's certain to make my top ten list at the end of the year. Brother is available now in every imaginable format from Gallery Books, a division of Simon & Schuster. If you love horror. I promise you won't be disappointed if you choose to make Brother your next read.

One of these things i...

"One of these things is not like the other." Michael is a sensitive and sweet boy underneath the twisted outer shell created by his demented family. Adopted into the family as a young boy, he is now a conflicted young man trapped in a life of terror without a clue how to escape, forced to play his part in his family's sick games. Michael's brother Rebel (born Ray, he renamed himself "Rebel" when he was a boy) is a sick and twisted man with an eerie bad boy charisma that attracts the ladies. He is Michael's big brother, and he never lets Michael forget that he belongs to Rebel and his life is at his mercy. Sister Misty is sweet and twisted. Where Rebel is cruel and twisted, Misty is just addled, her mind twisted by years of abuse and from listening to the screams outside her window. The entire family lives in fear of Momma. If Momma ain't happy, ain't nobody happy. Being Momma's husband, Wade seems to be just a boat without a rudder, steered by Momma's winds. He generally seems dispassionate or even uncomfortable or disagreeable with what often lands at his feet, but performs whatever duties Momma wants. Creepy story with even creepier characters, this one in a sense is a slow burner. From the opening paragraph, it starts right off with a bang, but then it's just a slow burn getting you to the climax. You know very bad things happen in this story, but it takes a long time to get there. This about drove me nuts, but in a good way! It's suspense at its best. My final word: This story had some very difficult subject matter, but it is presented in a very readable way. Eerie. That's what it is. Eerie. All is not okay at the Morrow farm.This is one of those scary, creepy Appalachian mountain family stories. You come upon an old farmhouse with a beat up old cellar door deep in the mountain woods, souped up antique car parked out front, and you know that nothing good happens there. But it does make for a good story!

As other reviewers hav...

As other reviewers have said, if you don't like extreme horror, stay away from this book! That is very true. I happen to like extreme horror, and I thought this was an awesome read. It felt a bit like Stephen King mixed with Jack Ketchum, but don't get me wrong, the author makes this all her own. Dark, twisted, disturbing and compelling, I couldn't put it down. Ania Ahlborn is one of my few must read authors, and I can't wait for her next book.

What a messed up story...

A special thank you to...

A special thank you to Gallery Books and NetGaley for an ARC in exchange for an honest review. Ania Ahlborn returns following, Within These Walls, with a dark, horror, and chilling psychological suspense thriller- BROTHER, a haunting family in rural West Virginia--- deep in the heart of Appalachia-- psychotic gruesome murders. Set in the 1980s in the back woods, away from everyone, Michael Morrow lives with his parents, Wade and Claudine and siblings, Reb and Misty Dawn. They are surrounded nightly by screams, blood, and torture. The perks of living out in the wilderness. The Morrows kidnap kids and young girls, kill and dismember them, and at least once they "adopted". One son wants out; however, he's under the emotional, physical, and abusive control of the family. A spell. They make him feel as though he owes them, he needs to be loyal. They take troubled souls who will not be missed. Michael does not want to be like his brother Reb, he wants to break free from the violence, the killing, and the murders. He is forced to commit horrific and gruesome acts. Ahlborn portrays in detailed vivid descriptions-so not for the weak, or faint of heart. His family preys on the weak; young women and murders them for fun. They are evil monsters. This was not supposed to be his life. Fifteen years earlier they said Momma had shipped Lauralynn off to Grandma and Grandpa Westfall's place in NC. Here one day and gone the next. Michael suspected that Momma had learned how to be cruel from her own parents. Maybe their meanness had been so severe that it had rubbed off on Claudine, like a contagious disease. When Michael meets Alice, a young innocent girl at the record store, in the nearby town of Dahlia, he is in love and wants to make sure he keeps her out of harm's way and their crazy family. He does not want her to know the disgusting things he has done. However, all the while Reb is evil, a devil-he has another plan. An evil twisted plan which will send shivers down your spine. Ahlborn's writing is intense, bold, suspenseful, and utterly shocking. She delves deep into the psychological effects of abuse, reminiscent of David Joy's Where All Light Tends to Go, (a different twist); however, a coming-of-age, of darkness, horror, abuse, and the emotional tugs of family, in the dark evil Appalachia area, and a glimpse of dreams and hopes of what could be with a normal life. A price to pay. They know they will never break free; however, an overwhelming strong need to end the violence. If you enjoy horror, twisted, and evil, Southern Gothic, mixed with literary fiction-you will enjoy piecing together the mystery of BROTHER, and its true meaning. Terrifying! Warning: Do not read before bedtime. A stunning front cover and a brilliant title - an author to follow! If you have not read Within These Walls - highly recommend. DARE you to Step Inside. "Children begin by loving their parents; as they grow older they judge them; sometimes they forgive them. -Oscar Wilde