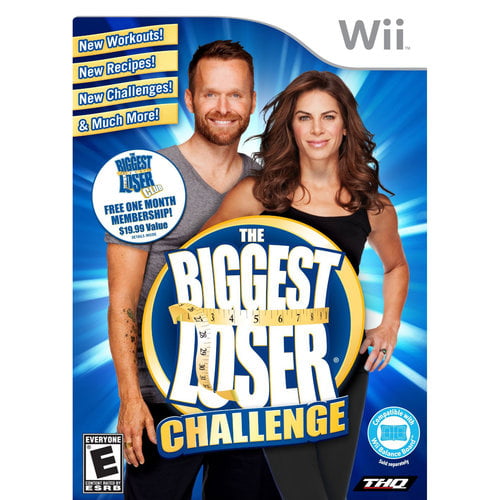 We aim to show you accurate product information. Manufacturers, suppliers and others provide what you see here, and we have not verified it.
USED

Buy this Game for a Great Workout without the $$$$

I bought this game not knowning how great it would be. I tried it the day i got it and WOW did it ever give me a workout. My son is 5 months old and being winter time i do not want to spend the money for a gym membership, so i tried this. It is AWESOME. First thing i liked right away was the fact that the trainer worksout at the same time you do and there is a person on the screen representing you. The trainer constantly talks to you, telling you to keep going and how great of a job your doing. Also you can track your calories burned on there and your weight and goals you have. You also get to choose how many times a week you want to workout and for how long. I recommend this game to ANYONE who wants to get a great sweat workout without the price of a gym membership...its great to be in the comfort of your own home! plus you do not need anything besides a wii remote if thats what you choose...it also has over 100 different exericises so your not always doing the same one:)

My wife loves it

My wife and I are trying to get back into shape after years of neglecting our health (let's be honest here right?) We have a few exercise games as we feel if you have fun while doing exercise you enjoy it more and stay motivated. This is one of the better games out there because it's a good starting point for people like us who are just slowiong getting into exercise. The exercises are not that hardcore that they turn you off. Plus you get daily tips and recipies, things like that. While we also play wii fit plus, ea active, and your shape on wii, I highly recommend this game as well.

This game has been the greatest game purchase I've ever made. Of course like some people have mentioned there are times where the game won't pick up some of your movements but its expected its only a game. I am currently doing a 12wk workout and loving it, I even got everyone in the house doing it, my 2yr old son enjoys trying to participate in some of the workouts. I would def recommend this game to anyone. I am 338lbs and for me most of the workouts are easy there are a few that I have some issues but like I am told "Pain is just weakness leaving the body".

This is a great product. I am actually enjoying my excersice at night now....I love that you can still do other exersices and you are able to log them on this game....Would definately recommend it to anyone that needs to loose weight and tighten muscles as you go...gives you a good workout!!!

Gives you a good workout, but missing a few things

This game gives you a very good workout and has a lot of great features. However, you cannot pause your workout, skip exercises or redo exercises - as a mother of an infant I need to be able to pause the workout occasionally to tend to my son and I cannot. There are also some exercises that I cannot do for physical reasons, but the system will not let me eliminate those from my workout. This is frustrating because skipping exercises lowers your score and makes the trainers "yell" at you more.

In the video they go way to fast without teaching you one minute you are on the wii board and next your not also even if you are not moving and doing the what they show you the game still thinks you are so its saying yours loosing cal. but your not even moving

A good challenging workout. The exercises that require you to put the remote in your pocket do not register well for me but I still enjoy the workouts.

Pretty good can be better

I have only been using this for a week but I have really enjoyed it!

I did not like this video. I hate having to switch the controller from hand to hand. Then you have to put in your pocket and my exercise pants do not have a pocket on it. I just expected it to be differant.

If you would like to share feedback with us about pricing, delivery or other customer service issues, please contact customer service directly.
1-3 of 8 questions
by Dennis68December 29, 2010

1. no, just put and in your wii console and use your remote to move with the example on the screen.
by toledocritic
Helpful?
2. The Wii fit board is optional but be prepared to have a measuring tape handy when you first start to get your body mesurements.
by MidwestBeauty
Helpful?
3. It works with or without the wii balance board. No other equipment needed.
by realme11
Helpful?
4. wii fit board
by 19carolinagirl79
Helpful?
5. yes, you could use a resistance band and an exercise ball. You really don't have to have either.
by Monaquilts
Helpful?
6. The wii balance board is nice to have and the ball but you do not need it to play the game!
by Bibbsashley
Helpful?
7. Other then the wii remote and balance board, you don't. but if you want to benifet more from the game you can get yourself a stability ball and resistance band. they also make clips for your wii remote. and they also make a glove for your wii remote to sit in for when you do boxing excersices. but all that is not neccessary. just your wii remote and balance board are.
by buster52
Helpful?
7 Answers

1. Nope.
by DevoeGirl
Helpful?
2. Yes you do.
by ProdigyWI
Helpful?
3. No, but it helps and opens up more games if you do decide to use it.
by anonymous426
Helpful?
4. No you don't have to have a balance board for this game. You can use it either way.
by shebecco
Helpful?
5. Yes along with a wii remote.
by buster52
Helpful?
5 Answers

1. Start as a new guest and go to freeplay that is where I found them.
by BusManager
Helpful?
2. You have to select the additional activities then chose freestyle. When you scroll down thru them u will see a little icon that tells u which ones use the band and some that use the stability ball.
by SMOOCHY43
Helpful?
3. All you got to do is go into the your PROFILE AND SETTINGS then your fitness settings. you will see an icon that looks like a stability ball. click on that and you will be able to add your fitness band from there.
by buster52
Helpful?
3 Answers