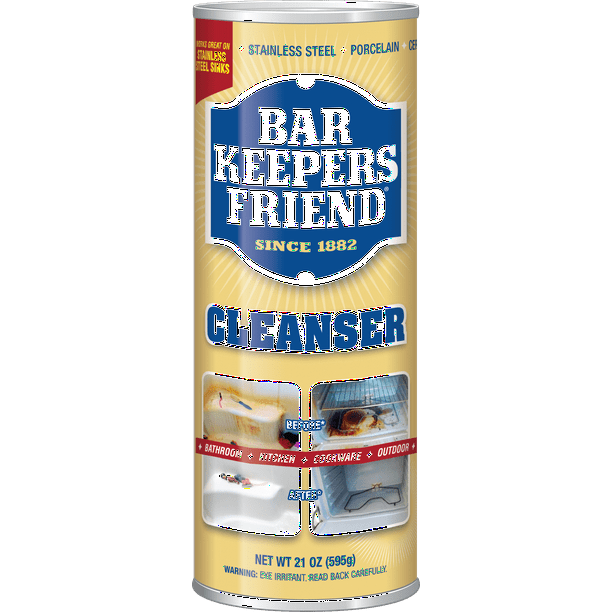 May etch some finishes, such as older porcelain. Test a small area first. May discolor some colored grout. Do not use on gold, silver, or lacquered surfaces. For brushed finishes, polish in the direction of the brushlines. Do not mix with other household chemicals, including detergents or bleach. Contains oxalic acid. Avoid contact with eyes. For eyes, flush thoroughly with water and call physician. If swallowed give large quantities of milk. Call physician. Keep out of the reach of children.

Instructions: Sprinkle BKF on a thoroughly wet cloth and rub gently. If applying BKF directly to metal, porcelain or plastic, make certain surface is wet then rub gently until rust or discoloration disappears. Rinse: For difficult stains, rust spots, tarnished surfaces, make a paste by adding a few drops of water to BKF. Let paste remain on stain no longer than one minute before rubbing. Rinse immediately. Laundry: Always test fabrics for fastness before using BKF. To remove stains, moisten stain and sprinkle enough BKF to make a paste. Rinse after 5-10 minutes. To remove yellow iron tint that bleaches can't touch, presoak using 3 to 4 tablespoons of BKF to each two gallons of water.

This stuff is amazing!

I've known about Bar Keepers Friend for many years now, but have never bought it because I assumed (incorrectly) that it was the same as other powdered cleansers. I have to admit that I was wrong. It's much, much better! I recently moved into a new rental that has a stainless steel sink that no one has taken proper care of. Over the years, hard water stains turned the sink a dull, lackluster, grey color, with some major built-up stains in the corners and around the drains. I was amazed that someone had left the sink in such bad shape. I had tried all sorts of internet suggestions and nothing was working. Not even a hard application of elbow grease. I decided to go ahead and spend a couple of dollars and try out this cleanser that has been around since 1882. To my absolute amazement, this stuff works like a charm! I worked some of the powder into a paste with water, rubbed it over the hard water stains, and let it sit for about 10 or 15 minutes. Then I used a non-scratch pad to really scrub the sink. After rinsing, I saw that about 80% of the stains were gone! A few days later, I did the same thing and now the sink is about 97% clean and sparkling. I think that one more application will finally make the stainless steel sink look like new again. Yes, it's a lot of work, but I really wish I had thought to take pictures of it before I started because the difference is simply astounding!

This stuff is amazing - marks at the bottom of coffee cups / gone! Instant pot stainless steel liner run in the dishwasher with film? It's clean after this stuff! Also use it on kitchen sinks and stubborn pot stains - ceramic Dutch oven is perfectly clean.

A cleaning staple for pots and pans

Have been using this product on my stainless/copper pots and pans. It cleans and shines the copper rim on my pots and pans as well as getting the gooky mess from the inside of pot/pan. This product also works well to clean the inside of the thermal coffee pots; just dump some in the pot with a little water, scrub inside of the pot with a bottle brush, rinse well, and voila, clean thermal coffee pot!

Very hard to find cruelty free product (note: does have harmful chemicals so be careful with your pets and kids). I found this by accident (my work was using it), and I like it. Much better than the other competitive brands that offer the same purpose. Cost effective (if you purchase at the standard listing price and not pandemic prices).

I had my home professionally cleaned and was given the tip on using this product. It works wonders for burned on food for pans, and smooth surface ranges, just make a paste on the item and let sit for a while. Doesn't seem to scratch. I use Bar Keepers Friend weekly to scrub my old stainless kitchen sink, rinse thoroughly, follow by Castile soap for a nice shine. Works great on stains on an older bathtub, too, and doesn't seem to scratch metal handles.

1. Yes, you can use this on Stainless Steel.
by CommunityAnswer
Helpful?
1 Answer

1. Yes, this product can be used for glass surfaces.
by CommunityAnswer
Helpful?
1 Answer