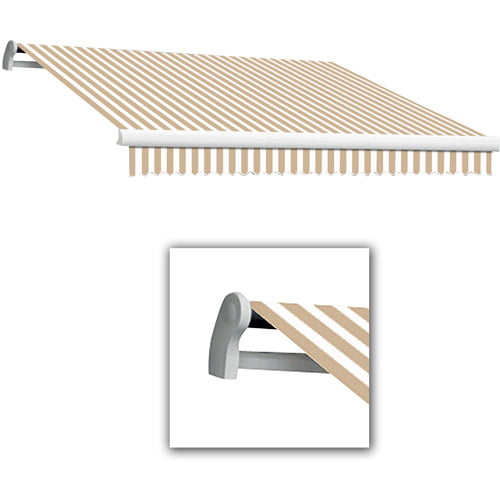 We aim to show you accurate product information. Manufacturers, suppliers and others provide what you see here, and we have not verified it.
Awntech Beauty-Mark Maui 24' Motorized Retractable Awning: Take the sun by the reins with a stationary or retractable awning by Awntech. Awnings are perfect for managing sunlight and updating the look of your home or business. Awnings lend a fine accent to any architectural style. They allow you to conserve energy and block light in the summer, and retractable awnings will retract and allow the warmth of the sun in the winter. Turn your outdoor space into a retreat, and keep the inside of your home 10 degrees cooler in the summer months. By shading your doors and windows, you decrease the amount of radiant heat entering your home or business, thereby reducing the amount of work your air conditioner has to do. Awnings protect your doors and windows from harsh weather and will keep interior furnishings, drapes and floors from fading. They are designed to make your life as comfortable as possible while increasing the overall value of your home or business.

Exactly what we were looking for

We have French doors that are exposed to the afternoon sun starting about noon. We tried one of those 4 legged tent covers but they are not easy to close up when wind and or rain starts. We live where hurricanes are always a possibility. We opted for an retractable awning. Let me state here that the folks at Hayneedle were able to answer all my questions about installation, replacement parts, shipping, etc. Our awning was delivered in a timely fashion, undamaged. Installation manual cover nearly every conceivable situation, with very clear diagrams and pictures. Our awning has been up for a week. It does exactly what we wanted. WE opted for the motorized 12 ft. Maui. The motor lets us open and close the awning following the sun's movement. At this point in time we are very pleased with our purchase.

Written by a customer while visiting hayneedle.com
Average Rating:(5.0)out of 5 stars

Written by a customer while visiting hayneedle.com
Average Rating:(4.0)out of 5 stars

happy with the awning dissapointed that there was not an awning cover included... have to go and shop for the cover now... my neighbour's was in included with theirs.

We bought an Awntech maui 14'x12' motorized awning in May 2019. We mistakenly thought it would be a pleasant convenience. Out of the box the awning fabric rolls up wrinkled on the roller, bags in the middle, allows the lightest sprinkling of dew or rain to pool in the middle, and appears very cheap and unstable. We bought the extended version of the awning, but we are afraid to fully extend it for fear it will collapse on us. If you open the awning a by mere 2' water will pool in the middle. In part I blame myself because I saw plenty of Awntech reviews, by buyers, stating how cheaply built they are and how after they installed the awning they discovered Awntech's customer service ends at the point of delivery. I found this out first hand when I contacted Awntech, three times, to ask them to repair or adjust the new awning. They responded "our warranty specifically states that using during in climate (sic) weather will not be covered under warranty. Some wrinkling of the fabric on the tube is totally normal and won't affect the function or longevity of the fabric." In climate (sic) weather? Every drop of dew or rain, no matter how light pools in the middle and causes the weak arms to sag. Some wrinkling of the fabric? The fabric bags, sags, and wrinkles over itself. It does not roll up evenly, so of course, it wrinkles on the roll. This Awntech Beauty Mark Maui motorized awning was purchased as a replacement awning as we were thinking of selling the house. The old awning, manufactured by a well known maker, had been used for 14 years and was still functional. During the 14 years it was in use there were many many times we forgot and left it partially opened overnight or during a light to medium rain. Dew and rain sheeted off of it with no problems. The material rolled back onto the roller smoothly. It did not bag, sag, and buckle over itself, even after 14 years. We wish we had it back, seriously. The awning we got from Awntech gives no better service than a patio

Written by a customer while visiting hayneedle.com
Average Rating:(5.0)out of 5 stars
Norma, June 5, 2020

If you would like to share feedback with us about pricing, delivery or other customer service issues, please contact customer service directly.
1-3 of 19 questions
by lobomom123April 13, 2014

1. The manufacturer promises a 5-year limited warranty.
by CommunityAnswer
2. I apologize for the delay. We were just informed of these questions. The fabric will last 10+ years against fading, water, mildew, soil, rotting...but our warranty is a 5-year limited warranty. Our frame parts that steel are first chrome plated and then powder coated to prevent rust for years. The aluminum parts are powder coated. The hardware and mechanisms are stainless steel. The high-end wireless manual-override motor is fully encased within the rollertube and sealed. The remote should not be exposed to water.
by Customer Care
2 Answers

1. It's determined by facing the awning.
by Customer Care
1 Answer