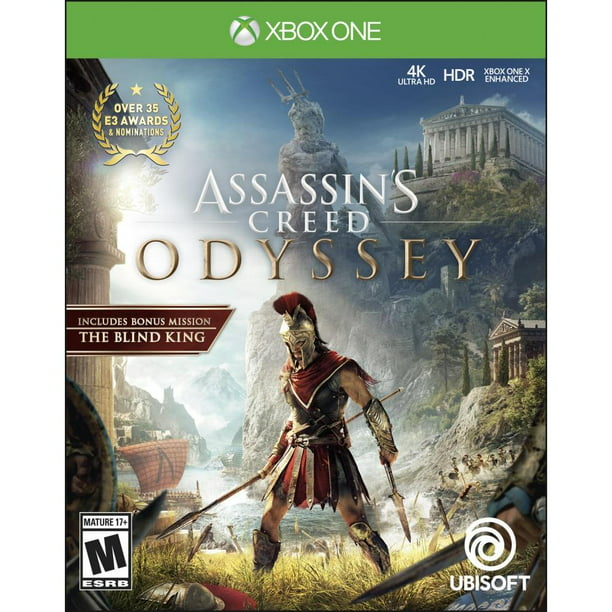 Write your own epic odyssey and become a legendary Spartan hero. Forge your destiny in a world on the brink of tearing itself apart. Influence how history unfolds in an ever-changing world shaped by your choices.

just what my son ordered, cheaper than gamestop.

Love it. My favorite game to play. Been playing for months and still not close to be finished with it.

Ubisoft has a recipe for success

I was late to the game getting into Assassin's Creed with my first game being Assassin's Creed Origins (which I just finished with 100% completion!), but I am absolutely hooked after playing Odyssey. It stands to be one of the best open-world RPGs on the market and a potential game of the year. I've only played it for a bit so far, but the Greek story-line seems absolutely captivating and thematically dense. While I could understand some complains about the repetitive nature of the AC games, there is just too much to explore for me to have any complaint along those lines. It feels impossible to not enjoy, especially if you are a tried-and-true AC player. Compared to Origins, the combat system definitely feels a lot snappier and more intuitive, yet with a much higher skill ceiling for more experienced video game players. It also seems to be more challenging in the respect that you can't just assassinate most characters in one shot like you could with Origins. Would give this game a solid 9/10, all credit goes to Ubisoft for pumping out another amazing game. Absolutely can't wait to sink my teeth into the storyline of this MASSIVE game and put some more hours into it. Definitely predicting this will be a killer during the holidays, perfect gift for a gamer, young or old!! I am writing this review as part of a contest.

The Assassin's Creed series has outdone themselves yet again with Assassin's Creed Odyssey! Set during the Peloponnesian War between Sparta and Athens, players not only get to choose the gender of their character (either Alexios or Kassandra), but also what city they support! By destroying enemy supplies, pillaging, and deposing national leaders, players can turn the tide of war for either city. Moreover, performing these actions will trigger a conquest battle with hundreds of Greek soldiers, captains, and mercenaries. Conquer an area for the city-state of your choosing and reap the fruit of enemy territory!

Odyssey also introduces a notoriety system, similar to that in other open-world games like GTA V. Essentially, you have the freedom to choose who you want to be: from a mercenary with a conflicted conscious to a ruthless psychopath, to everything in-between. However, should you choose to kill innocents, your reputation will degrade over time and you'll be chased by increasingly difficult bounty hunters who seek a price on your head. Odyssey also employs an open dialogue system, whereby players influence in-game outcomes, such as in-game side missions, through dialogue options.

Players experience their freedom in arguably the Assassins' Creed series' most realistic open world. With your eagle you can explore ancient Greece's colorful, picturesque, island landscape; it's white-stone isles, autumnal forests, and arid deserts. Similar to Assassin's Creed IV: Black Flag, players can once again recruit a crew, board, ram, and sink other ships! After conquering the Mediterranean, players can also conquer and tame wildlife for their bidding, such as attacking or causing a diversion in an enemy camp.

Fighting dynamics have also never been so seamless in the series. Players have access to a broad assortment of ancient Greek weapons, with a different combo attack against enemies. Lighter weapons will stun an enemy on the first blow, while heavier ones will knock them down. Weapons also have a ranking system, which means players can upgrade their simple blade into a legendary flaming sword! Newly introduced are hotkey buttons (e.g. Xbox D-pad) which host customizable weapons, inventory items, and attacks. Odyssey also integrates an ability hierarchy system similar to that of Assassin's Creeds Origins. As you rank up, you will unlock outstanding abilities such as directing the flow of your arrow after it's been shot.

Overall Assassin's Creed Odyssey is an epic must-play. It expands upon the open-world of Origins, while offering an incredible unparalleled story of Ancient Greece! I am writing this review as part of a contest.

Embark on the Odyssey

If you are a fan of the Assassin's Creed series, then definitely get this one. If you're not a fan, then still get this one and it might just change your mind about the series. For starters, it is a clean break from the series' convoluted timeline and events. Progressing through Odyssey's plot lines is relatively easy and keeps you engaged.

- Evolving abilities as you progress

- Actions have impact on story mode

- Kassandra and Alexios are a great duo of protagonists

- Dialogue choices are poor at times

From warping to an enemy's location for a quick kill to kicking soldiers off ledges with a powerful kick (This is Sparta!), you can do it all on Assassin's Creed Odyssey. A definite buy.

I wont sugarcoat this for you. Its a lot, but not completely, like Origin exepct in ancient greece oppossed to Egypt. REGARDLESS, it holds up its own. In my opinion, this is one of the top 3 best AC games so far. I liked Origins a ton but i absoulutely love Odyssey

One of THE most beautiful games out to date.

I want to start off by saying the graphics in this game is breathtaking.

To break down into a easier review to read:

- The textures, particles, and over all graphics are amazing. It leaves you memorized and in awe of the games landscapes and characters.

- Open world setting allows you to explore the world beyond the store line.

- The fighting setting has been update to offer smoother battling experience.

- Although the game is huge, the loading time in between the maps and towns are pretty fast.

- There are moments where the frame may drop but its hardly noticeable.

- Some of the in game mechanics are a bit off, such as random animals damaging you while riding.

- No multiplayer? Not sure if this counts as a con, but would be nice to have AC franchise get up to par with some of the newer multiplayer options.

Summary: Overall, this Odyssey is a great addition to the Assassin's Creed franchise. It offers you hours of great story lines, side quest and many other things to do. I would recommend this game to anyone who loves action packed RPGs.

I would go on an Odyssey to buy this game!

Assassin's Creed Odyssey will have you hooked from the start, after a very bloody battle. I have never been into the Assassin's Creed Series until now. I grew up loving Roman and Greek mythology and would love to "sword-fight" friends while pretending I was an ancient soldier. As I grew up, I had to stop role-playing. But, now because of this game, I have been able to relive my childhood. With the absolutely breath-taking attention to detail (for me it was the islands of Ancient Greece that had been recreated with startling scale and incredibly realistic ancient structures) the scenery of this game, alone, should make it a best-seller and also make you want to travel to the Greek Islands. The new storyline allows you to choose your path, letting you choose from an option of characters (Male & Female) to make your own destiny!

I wrote this review as part of a contest, but have seen my destiny, and it is to play this game!

Homer would be Proud!

It has taken years and years of "almost-there" iterations, but they finally did it--this Assassin's Creed game takes the cake, as it so rightfully deserves. Assassin's Creed Odyssey is exactly what you would expect from the title--an adventure through ancient Greece of Epic proportion that Homer himself would be proud of. In fact, ACO borrows more than just the setting of Homer's Odyssey, but also touches on similar mythical legends, characters, places, and more.

Set along a fictional Mediterranean Coast, ACO makes use of previous game mechanics that made it so revolutionary while adding an entirely new level of complexity and customization. As with every iteration of the game, the running, jumping, and climbing mechanics are smoother than the last and in this case, are finally entirely seamless. The same can be said about the fighting mechanics, but these have also drastically changed since Origins. ACO now boasts an extensive inventory and upgrades menu that allow the player to customize weapons and wardrobe, as well as upgrade attacks and abilities. This allows players to have personalized hotkey buttons for different attacks and inventory items--something that has not been seen before in Assassin's Creed games.

Speaking of never-before-seen game mechanics, Assassin's Creed Odyssey has a lot of them, as it emerges as a full-fledged RPG. Being such, ACO now boasts dialog choices that effect the outcome of the game, dynamic weather and Biome patterns that break up the monotony of landscapes, and notoriety levels, such as in the GTA franchise. While all of these components are drastically different than former AC games, there is still plenty that keeps Assassins Creed grounded.

As with all Assassins Creed games, Odyssey takes place in a nonfictional time with historical characters and events. Since this game is set in ancient Greece, the battle between Sparta and Athens is raging on, and the player is encouraged to fight along one side or the other, or both!

Another key aspect derived from past games is that of the sailing system. Since ancient Greece is comprised of hundreds of small islands, your ship is the main mode of transit, while it also acts as your home base. As in previous games, the player is able to recruit crew for their home base, or ship, and must do so if they expect to survive the high seas. Fun (I mean really fun) Fact: ships now have the ability to smash other ships in half and sink them!!!

Over all, this is an absolutely phenomenal game which takes every groundbreaking Assassin's Creed component and dumps them into an unbelievably vivid open world--think Skyrim on steroids. With stunning graphics, seamless game play, 30+ hours of cut scenes, and a setting and story to match, this is undoubtedly the best Assassin's Creed game by far, and quite possibly one of the best RPGs to date. Good work Ubisoft, keep it up!

This review was written as part of a contest.

i love ancient greece and this game definitely exceeds my expectations. i've always liked the assassin's creed franchise and i'm so glad they made one that takes place in ancient greece. the gameplay is tons of fun and the graphics are amazing. i think i'm going to buy a copy for my brother. i wrote this review as part of a contest.