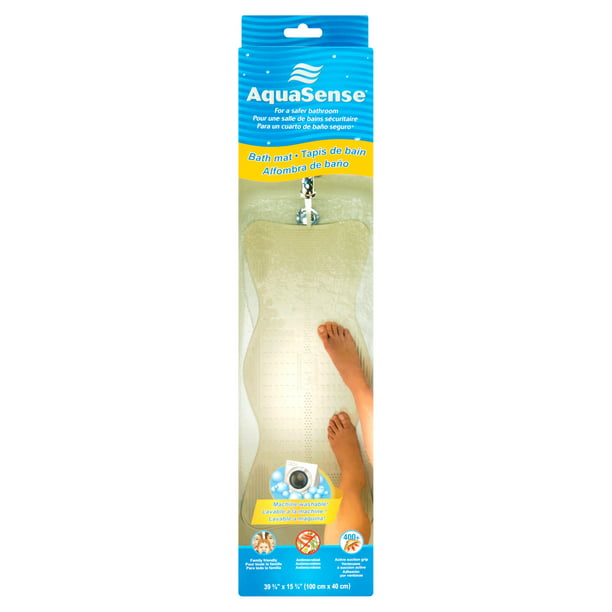 We aim to show you accurate product information. Manufacturers, suppliers and others provide what you see here, and we have not verified it.
Bath Mat

AquaSense is a trademark of AMG Medical Inc.

We have an older metal tub and had purchased a tub mat that did not work. It bunched up and slid and my husband even fell using it. So I found this one and decided it was worth a try. Boy and I glad we did! This mat has not moved or slid once since the day we put it down!! Highly recommend!!!

It fits well and stays put. The surface doesnt slip. I feel very secure with this item.

Great mat for the tub.

This is a very reliable and safe - mat for the bathtub. It grips really well and feels very nice on my feet. I would purchase this again.

Great product! YOU WON"T SLIP! A little rough at first if you're a tenderfoot, but you get used to it. Great that you can wash it in the washing machine! Bath mats always turned me off when it came to getting out the scrub brush etc, etc. YUCK! (it just, well, is a really gross job). But this one can be thrown into the machine and wa la! It's a good mat and will last for years. It's worth the 16 bucks! Thanks Wal Mart!

1. 40" long
by bags123
Helpful?
2. This mat is full-length, fits any standard size bathtub very nicely! You will be pleased. Hope this helps you with your decision. I have one and would order another one again.
by MrOpine
Helpful?
3. I just measured the rug and it is 32" long and 16" wide at the middle then 11" wide on the narrow parts so the bath chair legs can sit on the bath tub surface and not the bath mat.
by TheDigitalDad
Helpful?
4. The length of the mat is roughly 39inches and the width is roughly 16inches. I wish the length was at least 42inches, or even 48inches to cover full length of a tub with an opening for the drain plug.
by VK001
Helpful?
4 Answers

1. Yes, this bath mat is white.
by CommunityAnswer
Helpful?
1 Answer