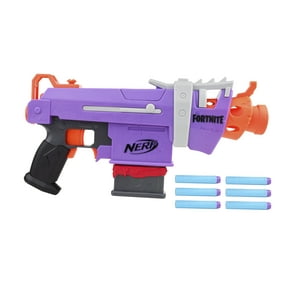 Introducing the NEW Adventure Force Spectrum Motorized Clip-fed Blaster. This modular tactical blaster features multiple configurations with a removeable scope, adjustable tactical grip and stock. The Spectrum is battery-powered and delivers semi-auto rapid-fire blasting performance. Hold down the Rev-Trigger to power-up the flywheels and then pull back the primary trigger to send darts flying up to 80 feet. This new design comes with a 10-round ammo clip and 10 Adventure Force Waffle Tip Darts. The upgraded Waffle Tip Darts are designed for increased accuracy and compatible with all Adventure Force Blasters and most standard NERF blasters. The Adventure Force Spectrum Motorized Blaster is the perfect combination of speed, power, and performance. Available Exclusively at Wal-Mart.com. Recommend for ages 8 and up.

What others said when purchasing this item
This is the best new motorized blaster on the market.
Ben, purchased on October 18, 2020
Son wants for a Nerf mod project
lynn, purchased on September 26, 2020

The Adventure Force Spectrum is a nice mid-sized motorized, clip fed blaster that is a welcome addition to our dart blaster collection. It has lots of cool features such as the adjustable stock, tactical grip, and realistic scope. The compact size makes it lighter and easier to handle than some blasters. I've only had a few jams, and the shooting range is decent. The blaster comes with a clip & 10 darts, but if you need more the blaster uses pretty much any standard dart. Hours of fun. Great toy to get everyone out of the house and active.

Very well made, I really appreciate the packaging of this toy. Easy to open and to assemble, Grand kids have not put it down. It does take 6 double AA batteries. Very easy to load the rockets. Nice size. Not heavy, the rockets are very light weight. All of our cats love chasing them.

The Adventure Force Spectrum is battery operated “dart blaster” which is capable of semi-automatic fire hence the 10 round magazine and is also modular in design. By having a battery operated firing mechanism gives it a better play experience as dart blasters are often a one-click one shot system. It is powered by six AA batteries so you might want to consider to use rechargeables as these toys tend to drain batteries quite fast.

Also, the modular design of the Adventure Force Spectrum hopefully will enable parts to be interchanged with other models. In this model the front handle, firing scope, and stock are removeable.

The Spectrum comes with only ten darts so you might want to purchase more. But really I would prefer a twenty or even a thirty round magazine. Do note that other models have capacities of up to 45 darts.

It boasts a firing range of around 80 feet. But I have tested the darts that came with the box and the reach as per my estimate is only around thirty feet in an indoor situation. I have tried other branded darts and performance is similar. But I had performance darts at home and have tried them on the Spectrum and range was better at around 60-70 feet. Still is was quite short of the rated range of 80 feet. Also I have notice the farther the reach, the darts tend to curve. This however was not present in my son's Nerf Gun.

With this minor quirk, this dart gun is still a recommendation as it can be fun to use. And it can set you apart as other players may use the other brand.

My boys have lots of these style guns from another brand. This one is large and has a large clip and bullets included. It also has bright colors and looks great. I haven't been able to test out the claim that it blast 80 feet, but it does shoot far. My sons have other blaster guns but both wanted to use this one. They actually preferred it to the other name brand. This would be a great gift for any boy!

The adventure force brand is an exclusive line of Nerf guns made just for Walmart and honestly they are some of the best out there.

This particular one does not disappoint it has an 80 foot range and my nine-year-old loves the motorized clip fed blaster.

The package includes one motorized blaster 10 darts a clip a scope and adjustable stock the works. Tons of fun whether you’re indoors or outdoors we have a bunch of nerf guns similar to these and it helps all three of my boys (including me) to remain active :).

If you’re considering Nerf guns as an activity definitely give this one a try as I had a hard time putting it down once getting started Made for people ages eight and up and I have to say I agree with that.

I received this Adventure Force motorized clip fed blaster for my 10 year son old to try. He has been having a lot of fun with it. It was easy to get started. You will need to insert 6 AA batteries, which are not included. My son says that this is a great toy! He is enjoying it tremendously. He especially likes the scope which is adjustable. He pointed out that the shoulder stock is also adjustable, so that you can find a comfortable fit depending on your size. The tactical grip is adjustable or can be removed. The clip is large and holds 10 rounds of ammo. He said the rapid fire on this is a lot of fun and the ammo does shoot far. This is a much loved toy and he is so thankful to have it. He rates it 5 stars and would definitely recommend it to a friend.

My 10 year old son really loves this gun! It has great features that his other guns don't have, which is really fun for him to play with. The gun can extend or shorten, plus you can take the scope on and off. Is also really cool because its battery powered and really fires its bullets a good distance! Backyard battles with his friends will never be the same.

My son loved everything about this toy and we were pleasantly surprised to find out it was battery operated which meant auto shooting. The bullets shoot very far and all the pieces of the gun are removable. He really liked the scope it had as well.

My twelve year old loves this toy. Be prepared to buy more ammo and batteries. It will need six and will have to be replaced often. I would recommend this toy overall and it is comparable with Nerf for less.

My son couldn’t wait to get this blaster and it didn’t disappoint. It’s easy to load and shoots fast and far. It’s great that it comes with darts. The scope is a fun feature that can be applied/removed easily, and, even though it doesn’t affect accuracy, it makes the blaster look cool. The green darts are easy to spot making cleaning up a breeze. The only downside is that it takes six batteries. All in all, this blaster gets a two thumbs up from my kid.