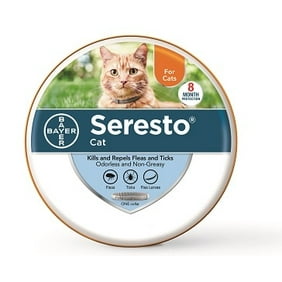 We aim to show you accurate product information. Manufacturers, suppliers and others provide what you see here, and we have not verified it.
Bayer Advantage II topical flea treatment and prevention for large cats over 9 pounds is a vet-recommended, monthly application that kills fleas through contact, so they don?t have to bite your cat to die. Advantage II kills fleas in multiple life stages, effectively breaking the flea life cycle to control existing flea infestations on your cat and prevent further infestations. This cat flea treatment comes in a convenient topical liquid that?s easy to apply, fragrance-free and waterproof after 24 hours. A single application of Advantage II flea prevention and treatment for cats starts working in 12 hours and kills fleas for up to 30 days. Even indoor cats need flea protection because humans and other pets can bring fleas into your home. Fight the misery of biting fleas with the help of Advantage II flea prevention and treatment for cats from Bayer.Advantage II Flea Prevention for Large Cats, 6 Monthly Treatments

Was very pleased with the product and will buy again. It started working very fast and my Jake is a happy cat again. Shipping was slow but that is to be expected with the covid shut down. I will order again.

This is great stuff--but the cat doesn't think so

It is the same stuff I paid about 18.00 for at the vet. The cat still doesn't like it, but it has no smell to me and sometimes I can put it on him while he is asleep and he never knows it. I like it because the fleas do not have to bite him before they are die-all they have to do is try to get on him. If I bought 2 at the vet I'd pay about 36.00 where I can get 2 for 27.00 from Walmart.com. He is highly allergic to flea bites.

works a lot better than most other products. i have a long hair cat and it is almost impossible to get the fleas off her. Flea baths don't work. Frontline does't do any good. and just forget about the over the counter stuff. spend the extra money and get Advantage.

I have a large cat and live in a apartment complex, my cat is an inside cat but sometimes goes to the balcony all our neighbors have dogs. All of the sudden my cat was infested our apartment was infested it was a nightmare,, passing the vacumn 2 times a day trying diferent medications on kitty it was frustrating nothjng works i believe i psemd about 120$ y a variaty of products shampoos, meds, carpet powder, sprays .....until someone told me about ADVANTIX said that it was a very trustted medication for fleas larvas kills the eggs ONE time JUST ONE TIME na she was in the bathtub shedding the fleas it was amazing i could finally breath again nightmare was over and she celt so reliefe so happy alive playfull and her face just show gratitude! ADVANTIX is a little pricey but is worth it and walmart actually has it for way Cheaper than petco and petsmart and u order it online at walmart they will have it ready to oick atvur local or favorite store with in hours stop by the pick ip drive thru and u are settle! Thank you ADVaNTIX for giving me and my cat our life back and walmart for suck a great,fast and affordable service and product!

If you would like to share feedback with us about pricing, delivery or other customer service issues, please contact customer service directly.
1-2 of 2 questions
by FedupwithWalmartMay 21, 2020

1. No, this does not require prescription.
by CommunityAnswer
1 Answer