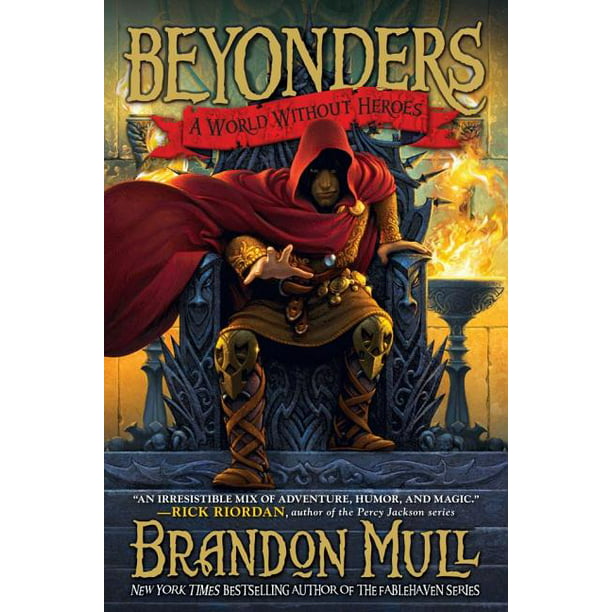 A World Without Heroes Jason Walker has often wished his life could be a bit less predictable—until a routine day at the zoo ends with Jason suddenly transporting from the hippo tank to a place unlike anything he's ever seen. In the past, the people of Lyrian welcomed visitors from the Beyond, but attitudes have changed since the wizard emperor Maldor rose to power. The brave resistors who opposed the emperor have been bought off or broken, leaving a realm where fear and suspicion prevail.

In his search for a way home, Jason meets Rachel, who was also mysteriously drawn to Lyrian from our world. With the help of a few scattered rebels, Jason and Rachel become entangled in a quest to piece together the word of power that can destroy the emperor, and learn that their best hope to find a way home will be to save this world without heroes.

I really enjoyed Mull's Fablehaven series and was very excited to see what he would come up with next. This series is definitely different than his Fablehaven series and is more of a classic fantasy adventure type of book. I really enjoyed it and am excited to see where this story goes. Jason is just trying to live out his normal life when he falls into a hippopotamus and ends up in a different world. There he meets up with another Beyonder like himself named Rachel and they are both drawn into a quest to find a mysterious word that is capable of defeating the evil overlord of the realm. Jason and Rachel are pretty good characters; although I didn't think characterization was the strong point of this novel. The strong points were the interesting world, the intriguing quest for syllables in a word, and the absolutely bizarre characters that Mull has thought up. I think Jason and Rachel were the weakest characters in the book, but some of the characters surrounding them are very engaging. For example the Seed person, Jasher, is really awesome and really added alot of action to the story. There is humor throughout the book which keeps things light and funny. I love adventure-quest type of books and that is very much what this book is. The characters are given clues, have to find parts of the Word, and then get more clues to the next part. I thought the plot was well woven and there were a number of twists and turns to keep the book surprising. The characters grow throughout the story and you can see that they are developing into forces to be reckoned with. Another thing about this book I absolutely loved were some of the bizarre character races and crazy obstacles. For example a lake you can run across but if you stop moving you sink (can we say non-newtonian fluid??) I also loved the displacers which could remove parts of their body and send them places. Another wonderful race were the Seed people who can live many lives as long as the seed in the back of their head is replanted. These things were creative, super interesting, and a lot of fun to read about. The way these interesting characteristics integrated into the story were wonderful. The book touches on interesting issues versus what is right and wrong. Questions such as should you endure hardship for the greater good are asked and issues around personal responsibility for the whole of a race are dealt with. Overall I really, really enjoyed this book. There is humor and adventure here, an interesting world, very creative races, and a lot of questing going on. I am super curious to see where this story goes and eager to read the next book in the series. This book is not another Fablehaven, it is more of a classic fantasy adventure quest. For some reason all the bizarre creatures and the crazy questing put me a bit in the mind of the Labyrinth movie. Those of you who like fantasy adventures with quirky characters will really love this book. I also recommend the Emerald Atlas by John Stephens, The Kane Chronicles by Rick Riorden, The Bartimaes Trilogy by Jonathan Stroud and the Ranger's Apprentice series by John Flanagan.

Reviewed by krau0098krau0098
Written by a librarything.com customer.
Helpful?
Average Rating:(5.0)out of 5 stars

I mostly read YA Ficti...

I mostly read YA Fiction. to tell you the truth I havnt read all of the fablehavens they were good but not amazing. I would not to be able to compare the Fablehaven series at all to this book. it is a whole different book all together. I do rate this book as probally one of my favorite books of all time. I loved it and can not wait for the others to come out :)

Reviewed by CyrusthegreatCyrusthegreat
Written by a librarything.com customer.
Helpful?
Average Rating:(5.0)out of 5 stars

I just finished the bo...

I just finished the book Beyonders: A World Without Heroes by Brandon Mull, author of Fablehaven. This first installment of a trilogy is an action-packed adventure, full of gripping suspense, intrigue and enough funny scenes to keep the story moving. The plot revolves around two teens, Jason and Rachel, who find themselves transported to the world of Lyrian where they meet and become caught up in a rebellion against the evil wizard Maldor. Among the many reasons I enjoyed the story is that the author offered the most accurate depiction of a homeschooler I've ever read. I hope other homeschoolers consider reading this book. It was pressed upon me by my two homeschooled teenagers. My daughter had discovered it at the library and picked it up because she "liked the cover." Which shows that sometimes it is a good idea to judge books by their covers. I highly recommend this book. The only problem with it is that we will have to wait until Spring 2012 for the second installment. Gah!

Reviewed by jugglingpaynesjugglingpaynes
Written by a librarything.com customer.
Helpful?
Average Rating:(5.0)out of 5 stars

Jason Walker lives a very normal life for a 13-year-old boy, but when an event at the hippo exhibit during his volunteer job at the zoo leads him to the land of Lyrian, life is anything but normal. Upon entering this place, he comes across a gathering of people who are watching a suicidal sacrifice of musicians called "The Giddy Nine" on the river and over a very large waterfall. In seeing this, Jason tries to stop it, but may have done more harm than good. In trying to determine where he is, he stumbles upon the Repository of Learning. He is told by the Loremaster (the librarian) that Jason is a Beyonder. Beyonders are rarely seen in Lyrain, but there still exist portals that connect Jason's world to this one. Hoping for more information, he is forbidden to enter the third floor. Curiosity and the thought that there might be knowledge there that will help him get home leads him to his destiny. In this unused portion of the Repository, he discovers and reads a page, and in particular a syllable that will delay his journey home and set him on another journey. He now has to find all the syllables to a "Word" that will destroy the wizard ruler of Lyrian, Maldor. These syllables are hidden all over Lyrian. With the help of Rachel, a girl from the same place as Jason (although Jason is from California and Rachel is from Washington), they will have to use their wits and each other to piece together the "Word." With Maldor and his minions on their trail, their journey is fraught with peril...from friend and foe alike. A great new adventure series from the author that gave us Fablehaven. This series has a darker overtone than his previous books, but the adventure is even greater. Jason and Rachel are very likeable characters, and I love how stubborn they both are! It will be very hard to wait for Book Two, Seeds of Rebellion, coming out in Spring of 2012, with the final installment in Spring of 2013. Ages 9+ Publisher: Aladdin (March 2011) ISBN: 9781416997924 Available as an eBook

Reviewed by okeanotiszoisokeanotiszois
Written by a librarything.com customer.
Helpful?
Average Rating:(5.0)out of 5 stars

Fabulously entertaining! As I did with my daughter when she was a teenager, I am trying to read books with my son. This goal is challenging and growing me as a reader. In other words, I'm trying a new genre: Sci-fi/Fantasy. To pursue this goal, I bought the well-reviewed boxed set of the Beyonders trilogy by NY Times best-selling author Brandon Mull. My son read through it so quickly that he finished the entire trilogy before I even began the first book. That's how much he loved it. He's a sixteen-year- old obsessive gamer who took time away from his games to read this series. The main character, Jason Walker, is an average teenage kid who falls into a hippo tank at his volunteer job and is magically transported to the world of Lyrian. The jaws of a hippo serve as the magic portal. Quite funny, right off the bat. Then there are riddles to be solved, dangerous characters to avoid, the appearance of another Beyonder (people from Earth)in the form of a teenage home-schooled girl named Rachel and a heroic quest. One of the first people that he meets is the Loremaster (a librarian). Then there is the displacer, one of a breed of characters that can attach and unattach his head, hands, and other parts at will. Disgusting but also handy. Edomic is the language of creation spoken only by the wizards (of which there is apparently only one left and he is evil).Vocabulary words:TraversingAuditoryApertureFriezeFunny quote: Jason was "relieved to have found an actual, non-furious person" (p. 35).Interesting image: "It looked ready to topple at a cough from a butterfly" (p. 77).Philosophy: "People find meaning where they can" (p. 82).For discussion: What makes a hero? Why does the world need heroes?"Heroism means doing the right thing regardless of the consequences" (p. 110)."For each of us destiny is a blend of potential, circumstances, and choices. You could flee and hide. You could bargain with Maldor. You have chosen a heroic path. Walk it without apology" (p. 326). "Yet here you are, toiling in the wilderness,"..."the two of you picked the right road, even though it is the most difficult. This is the essence of heroism" (p. 326).This is one of those books that may have been written for children and teens but will appeal to adults as well. Perfect for reading together as a family.