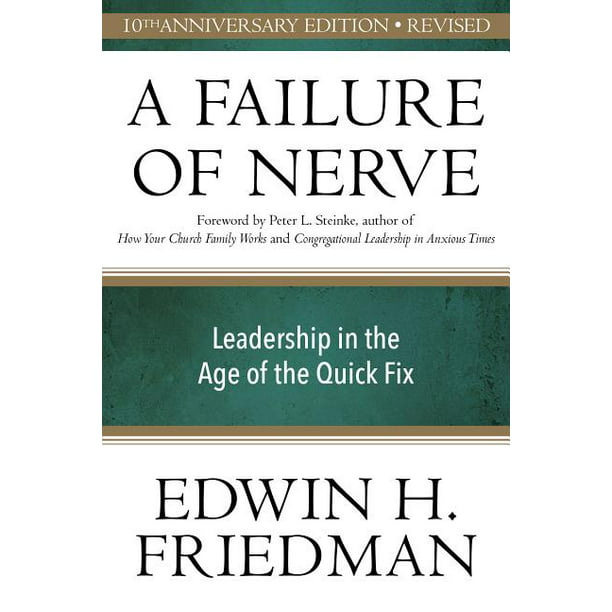 We aim to show you accurate product information. Manufacturers, suppliers and others provide what you see here, and we have not verified it.
Ten years after his death, Edwin Friedman's best-selling A Failure of Nerve continues to offer insights into leadership that are more urgently needed than ever, and this revised, anniversary edition is essential reading for all leaders, be they parents or presidents, corporate executives or educators, religious superiors or coaches, healers or generals, managers or clergy. Friedman was the first to tell us that all organizations have personalities, like families, and to apply the insights of family therapy to churches and synagogues, rectors and rabbis, and politicians and teachers. His understandings about our regressed, "seatbelt society," oriented toward safety rather than adventure, help explain the sabotage that leaders constantly face today. Suspicious of the "quick fixes" and instant solutions that sweep through our culture only to give way to the next fad, he argued for strength and selfdifferentiation as the marks of true leadership. His formula for success is more maturity, not more data; stamina, not technique; and personal responsibility, not empathy. A Failure of Nerve was unfinished at the time of Friedman's death and originally published in a limited edition. This new edition cleans up some oversights in the original and brings his life-changing insights and challenges to a new generation of readers. "Reading this book is like discovering an unpublished Beethoven sonata or a missing play of Shakespeare. Ed Friedman was one of our most brilliant, original, and provocative thinkers across the fields of therapy, ministry, and organizational leadership." --Professor William J. Doherty, Director, Marriage and Family Therapy Program, University of Minnesota

For the most part, this book is amazing. It's full of the kinds of ideas that make my brain feel like it's been picked up and turned in a different direction. I feel refreshingly disoriented, as though the world holds more possibilities than I realized. The pages of the library copy I read are porcupined with neon-colored paper flags as I tried to mark all of the passages I wanted to quote, especially from the first five chapters, which apply family systems theory to explain why there are problems within all sorts of systems---families, corporations, governments---that are resistant to fixing by myriad leadership techniques and logical plans of action. These sections helped me understand better what has been going on in the United States during my lifetime, at least, and reading them helped decrease my surprise at the outcome of this year's presidential election. Seeing what's going on around me as part of a natural, necessary progression also helped to decrease my anxiety. Of course, things are bound to get worse before they get better and there's no guarantee they'll be better in my lifetime, but the fact that there's hope is, well, hopeful. Friedman wasn't able to finish the book before his death in 1996, so it's not surprising that the later chapters are the ones that leave me wanting. The only significant example of differentiated leadership that he provides is of his own experience managing various emotional triangles during a health crisis. I did not expect a step-by-step guide to self-differentiation, but having more examples would have been very helpful. I get that the differentiated leader acts as an electrical transformer within a system (Friedman's analogy in chapter 8, on p 232 of the edition I read), taking in anxiety at 11,000 volts and ramping it down to a manageable 110 volts on the other side, and that the differentiated leader does this largely through self-awareness, self-regulation, and an awareness of the interlocking relationships within any system. This knowledge helps me to see my relationships with my family of origin, with the family I've built, and with my religious community in a different light, but I could really use more examples of what self-differentiated leadership looks like so I could know if I'm doing it right. But when I think about it, this desire for certainty is itself a symptom of the data addiction inherent in the anxious system. In response to my anxiety and my learned reactions to it, I yearn to collect data and to see my actions as black or white, right or wrong. So, although those last chapters are incomplete and feel that way, maybe there's enough for me to work from anyway. I recommend this book for anyone who's feeling confused or anxious about the current national culture in the United States and likely in other countries, too, as these concepts have the feeling of universality. Although I find some of his biological analogies slightly dubious, I agree with Friedman's hypothesis that the secret to moving forward, innovating, and reaching a new paradigm is going to be individuals who are adventurous rather than anxious and connected without being emotionally enmeshed. There's so much to quote from this book, but it doesn't lend itself to soundbites, so I'll refrain from quoting and just encourage you to read the book yourself. And if you do, I'd love to hear your take on it (whoever you are).

Reviewed by ImperfectCJImperfectCJ
Written by a librarything.com customer.
Helpful?
Average Rating:(5.0)out of 5 stars

This is one of the best books on leadership I have read in a while. It helps to know something about systems theory, or family systems theory, because that greatly informs his framework. Essentially Friedman makes the case that leadership is a lonely task, because most people don't want their world shaken. That is the bad news. But the good news is that if you can stick it out, changes occur as you change your way of doing things. Sometimes it feels a little too much like magic, but in fact, having tried out many of his ideas, they work more often than not. I highly recommend this book for anyone who leads an organization, or for someone struggling with family issues.