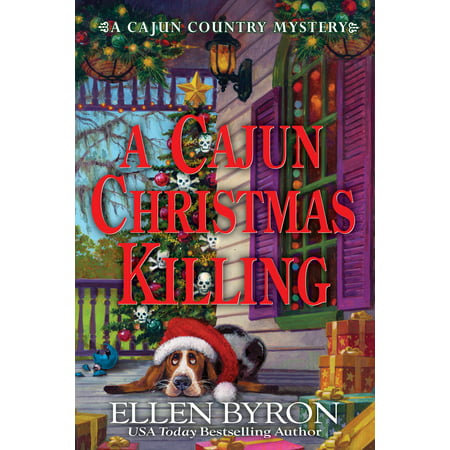 We aim to show you accurate product information. Manufacturers, suppliers and others provide what you see here, and we have not verified it.
Maggie Crozat must pair up with unlikely ally and longtime family enemy to catch the killer before Christmas on the bayou is ruined in USA Today bestselling author Ellen Byron's third Cajun Country mystery. Maggie Crozat is back home in bayou country during the most magical time of the year. In Pelican, Louisiana, Christmastime is a season of giant bonfires on the levee, zydeco carols, and pots of gumbo. Except, this year, the Grinch has come to stay at the family-run Crozat Plantation B&B. When he floods travel websites with vicious reviews, Maggie thinks she’s identified him as rival businessman Donald Baxter. That is, until he’s found stabbed to death at Maggie’s workplace. And Maggie and her loved ones become top suspects.

The Crozats quickly establish alibis, but Maggie’s boyfriend, Detective Bo Durand, remains under suspicion. With Bo sidelined during the investigation, Maggie finds herself forced to work with an unlikely ally: longtime family enemy Rufus Durand. Her sleuthing uncovers more suspects than drummers drumming, and lands her in the crosshairs of the murderer.

The sleigh bells are jingling, and the clock is ticking for Maggie and Rufus, who must catch the killer or it will be the opposite of a Joyeux Noël in A Cajun Christmas Killing, the recipe-stuffed third installment of USA Today bestselling author Ellen Byron’s Cajun Country mysteries.

I Loved This Book. From the very first page to the last one I enjoyed this story so much. I just wish I could have given it more than 5 stars. The mystery part of the story was written perfectly. I didn't know who the killer was until the end and that excited me. I hate when I figure out who the killer is half way through the book. The author included just the right amount of description and I adored reading about the Louisianan Christmas customs. I will admit I had tears in my eyes while reading the end. I wished that I was part of the celebrations. This is book three in the Cajun Country Mystery Series but you needn't worry if you haven't read the first two book because this book was so well written that you don't feel as if you're missing something. I've already put the first two books on my To Read list.

Title: A Cajun Christmas Killing: A Cajun Country MysteryAuthor: Ellen ByronPublisher: Crooked Lane BooksGenre: Cozy/Mystery Bonfires on the levee, zydeco carols, and pots of gumbo greet Maggie Crozat when she returns home to Pelican, Louisiana. It's Christmas time, her favorite time of the year. This year, however, things aren't going as planned at the Crozat Plantation B&B. Murder shows up for the holidays.Someone is writing bad reviews on travel websites that are hurting business. A rival, Donald Baxter is not whom he seems, and before long her family and everything they worked for are in danger. Maggie is set to accuse Baxter of trying to destroy their business when she finds him stabbed to death.Her family all have alibis, Detective Bo Durand, Maggie's boyfriends comes under suspicion. Maggie is forced to work with longtime family enemy Rufus Durand, who, as it turns out, isn't as bad as she thought. The investigation leads her in circles and places her in the line of fire.--A Cajun Christmas Killing is a wonderfully entertaining book with colorful characters who will remain in the reader's memory for years to come. Ellen Byron has crafted a story that leads the reader down a path of Cajun proportions. Filled with everything you would expect for a Cajun Christmas celebration, music, unique characters and of course, food.Maggie is crazy about her boyfriend Bo, and she wants things to move on to the next step, but Bo is a gentleman and won't be rushed. Tug and Ninette, Maggie's parents, are the kind of parents who support their daughter in everything she does but also want her to be happy and settle down. Gran is a delight; she has a mischievous nature; she is lively, caring and can be put on airs when necessary.This book is the third installment of the"A Cajun Country Mystery" series. Readers that have not read the first two books will have no trouble understanding the backstory, the players or their role in the family dynamic. They will fall in love with the Cozart family. This book is a page turner and will keep the reader guessing to the end. The reveal of the killer is in true Cajun style, filled with excitement that leaves a smirk on the reader's face. The story is fast-paced and flows smoothly; it is extremely well written. The action and intrigue are non-stop. This book, along with the series is highly recommended as an all-out entertaining and satisfying read.An ARC was provided for this book.

Maggie Crozat is an ar...

Maggie Crozat is an artist who returned home to Pelican, Louisiana after her relationship soured. She's still painting, but mostly she's helping at her family's Crozat B&B and acting as a tour guide at the Doucet Plantation, which once belonged to her family but was donated to the state, and is now open to visitors. She's also involved in a new relationship with Bo Durand, and while they're still finding their way, they're completely committed to each other. Unfortunately, she hasn't had the easiest (to say the least) relationship with Bo's cousin Rufus, who doesn't like the Crozats - all dating from a feud going back to the Civil War. When Maggie's family discovers that someone is writing negative reviews of their B&B and she finds out from her Uncle Tig that a man named Steve Harmon is trying to turn the Crozat home into a boutique hotel, Maggie isn't letting it happen without a fight. And when she discovers that a particularly nasty guest is the same man, her mother throws him out of the hotel. But when Maggie is giving a tour at the Doucet plantation, she discovers Harmon's body, and now there's a bigger problem: Although Maggie and her family have been cleared of any wrongdoing, the same can't be said for Bo. He had a very public argument with Harmon, and is on desk duty until the murder is solved. So Maggie and Rufus must team up to find the killer and clear Bo's name. But there's more going on beneath the surface, and Maggie starts to realize that Harmon's enemies weren't all in the hotel business, and even his widow isn't sorry he's gone. But as she gets closer to the truth - and the killer gets closer to her - another death occurs and Maggie's running against the tide to find out who wants her permanently out of the picture... This was a delightful book to read. Ms. Byron gives a wonderful vision of what Maggie's Pelican looks like during the holidays, and it would be wonderful to visit. Bonfires, winter warming food and drink, and decorations galore. Maggie has grown up in a wonderful atmosphere. Aside from the scenery, it was a surprise - albeit a nice one - to see the changes in Rufus since he's become a father. He's mellowed out and realized the type of person he was, and watching him and Maggie work together to help Bo was refreshing, to say the least; he's actually becoming a likable character. The murder itself was very well done, and I while I figured it out a little earlier than Maggie, it was nice to watch how she put everything together at the end. I also enjoyed the subplots involving Bo's ex-wife, Rufus' new (maybe) love interest, and it was quite revelation to finally meet Maggie's ex Chris (and realize how she dodged a bullet on that one). All in all, Ms. Byron has given us another worthy journey into Cajun Country, its traditions, its people, and a wonderful mystery to decipher. I look forward to reading the next in the series. Highly recommended.

law-enforcement, bayou, Louisiana, Cajun culture, situational-humor, cozy-mystery, family-dynamics, relationships Maggie is a smart, observant, paint artist with old school family lineage, kooky relatives, and a whole lot of figurative brush fires to put out. The main family home is a B&B with someone sabotaging the approval rating, the other family plantation is registered as historic but is being run by a corporation with delusions. The obnoxious owner of the corporation is staying at the B&B, but ends up murdered in the plantation house. Not only Maggie, but her whole family, some friends, and even her nice new boyfriend the cop are on the short list, even her crooked former boyfriend from NYC, who is a paid consultant for the deceased. Very twisty with lots of situational humor and a lot of red herrings. All of the characters are well developed and are very interesting, as is the trip to the Garden District of NOLA. And then there's all the mentions of the terrific local food! Thanks be that there are several of the recipes given at the end of the book! I requested and received this book courtesy of NetGalley.