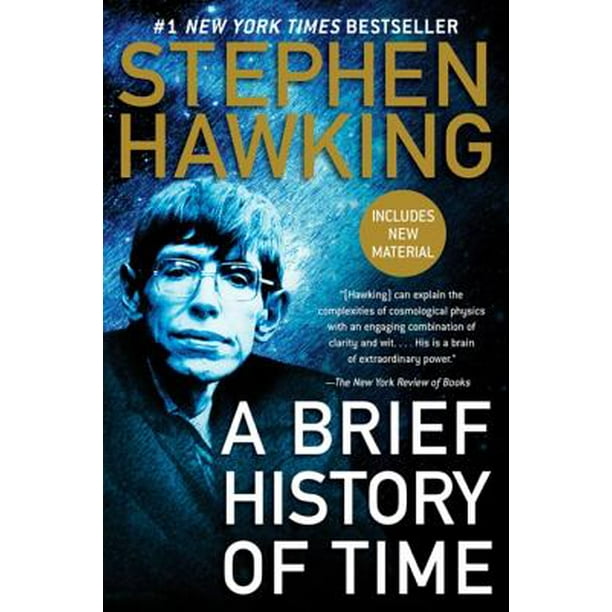 A Brief History of Time - eBook

A landmark volume in science writing by one of the great minds of our time, Stephen Hawking’s book explores such profound questions as: How did the universe begin—and what made its start possible? Does time always flow forward? Is the universe unending—or are there boundaries? Are there other dimensions in space? What will happen when it all ends?

Told in language we all can understand, A Brief History of Time plunges into the exotic realms of black holes and quarks, of antimatter and “arrows of time,” of the big bang and a bigger God—where the possibilities are wondrous and unexpected. With exciting images and profound imagination, Stephen Hawking brings us closer to the ultimate secrets at the very heart of creation.

A Brief History of Time - eBook

I feel so uneducated w...

I feel so uneducated when I realize that I did not know who Hawking was or how important this book was. If I had notfound it in a thrift store a few days ago I would be equally ignorant. It is old, but now reading about science in magazines I realize that I can related the articles to this and update my information. Terrific.

Hawking presents a scientific and philosophical view of the universe via the most complicated theories of mathematics and science in layman's terms. That said, the book requires a second reading. There's so much intriguing information in the book's 191 pages that on a first reading, I believe it would be difficult for anyone (without advanced knowledge of astrophysics, quantum mechanics, etc.) to conceptualize all the book contains and postulates. Nonetheless, an incredible book for anyone asking such questions as: how did we get here and where are we going? among others.

Reviewed by NateJordonNateJordon
Written by a librarything.com customer.
Helpful?
Average Rating:(5.0)out of 5 stars

I read the illustrated...

I read the illustrated version bundled with The Universe in a Nutshell, but decided to set the latter aside for some time next year. This was a re-read, but with a few more years behind me and a broader awareness of the subject, I took in more this time around. One of the New Scientist top 25 most influential popular science books (August 2012) that made the final reader vote cut in the number two spot of the top ten. I had read I think five of them already, this being one, and decided I would work through them all.Despite some of the not-so-glowing comments on Goodreads, I found the subjects covered very accessible. Excellent read, particularly when paired with Lawrence Krauss and Brian Greene.

Reviewed by RazinhaRazinha
Written by a librarything.com customer.
Helpful?
Average Rating:(4.0)out of 5 stars

This book is interesting for those who want to learn about the world and why things work the way that they do. This is a perfect book as it tells you all you need to know about physics.

Considering that I hav...

Considering that I haven't taken a physics class since high shcool, I started this book expecting to follow only a minority of the information presented. However, Hawking does an excellent job explaining complex mathematical theories in the most basic of terms. Even so, the book did require my undivided attention and still I couldn't follow every single idea. (For example: it was difficult for me to wrap my mind around imaginary time and to think in four dimensions.) I absolutely loved this book (so much, in fact, that I read it twice) and can't wait to read more from Hawking. I recommend this book to anyone interested in understanding the universe in which they live ranging from the extraordinarily vast (general theory of relativity) to the extraordinarily small (quantum mechanics) and the search for the Theory of Everything (uniting the two theories in a quantum theory of gravity).

Reviewed by KayPrimeKayPrime
Written by a librarything.com customer.
Helpful?