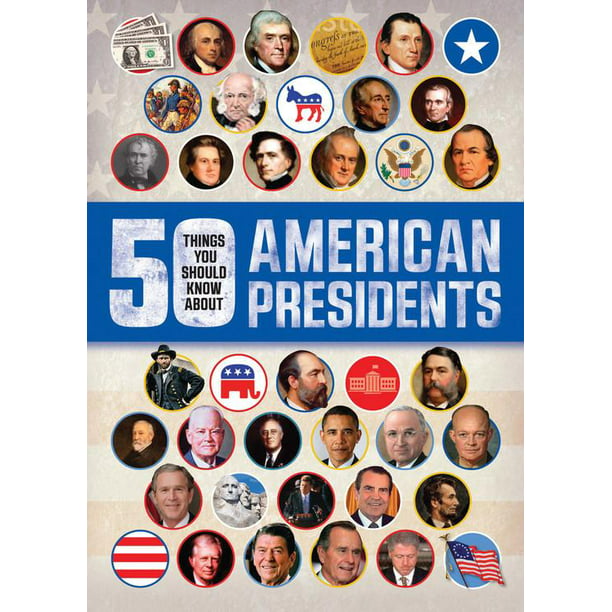 Across 50 bite-sized chunks of information (and generously illustrated with photos, sketches and infographics), all the presidents are covered - from the first person to take office, George Washington to Barack Obama. Fascinating facts are included on each page: for example, did you know that Franklin D Roosevelt is the longest serving president? The US political system is clearly explained, with the major changes throughout the decades highlighted for easy reference.

This book has an inte...

This book has an "interesting" collection of information about American Presidents. Each president gets a page and sometimes a double-page spread. The omissions are of course as informative as the inclusions. On the page for Andrew Jackson, we do learn that he "signed" the Indian Removal Act, but not that he was instrumental in pushing it through, nor about the vast tracts of land he took from Indians through force and/or deceit. His speculation in that land is also not mentioned. On the page for Polk, we learn he tried to buy land from Mexico to expand the U.S., but Mexico refused and then in 1846 "its forces attacked U.S. troops as they entered disputed territory claimed by Mexico." Abraham Lincoln, then a member of Congress, lashed out against the Mexican War, challenging the alleged "facts" promulgated by Polk to justify the war Lincoln believed was "unnecessarily and unconstitutionally commenced." We do not learn of any questioning of the war and the resulting land grab in this book. As for Lincoln, who gets a double-paged spread, the author allows that Southern states seceded from the Union over slavery, but phrased it as "Angered by President Lincoln's support for the abolition of slavery...." In fact, this is not a good representation of this very complex issue. Lincoln said in his first inaugural address, "I have no purpose, directly or indirectly, to interfere with the institution of slavery in the States where it exists. I believe I have no lawful right to do so, and I have no inclination to do so." The book also errs in implying that the Emancipation Proclamation freed the slaves, which it did not do. Lincoln declared slaves free in areas that he did not control, while leaving slavery untouched in areas that he did. Andrew Johnson gets a huge pass on his page. Although he is widely considered to be "the worst president in U.S. history," this is nowhere mentioned. The book does not even tell us that Johnson was impeached in 1868, keeping his job by only one vote in a Senate trial! The most egregious piece of information on Johnson's page was that African Americans gained freedoms in his administration by virtue of The Civil Rights Act of 1866. But Johnson vetoed that legislation not once but twice! His vetoes were overridden by Congress. On the page for Ulysses S. Grant, there is no mention of the incredible number of corruption scandals that rocked his administration, involving a group that included his personal secretary, his vice president, and a number of cabinet members, inter alia. [Historians agree Grant was not a great judge of character when it came to the men who served under him.] Instead, a big box is given over to his work "to change policies toward Native Americans. He thought that housing them on reservations and helping them become farmers would help." In fact, Grant wanted to "civilize" the Natives by making them embrace white culture and eschewing their own. After the page on Grant, we get a spread on "Expansion and Power," which declares "The end of the Apache Wars in 1886 allowed settlers to spread across the entire continent." Really? This is how the genocidal massacres by the U.S. Army are described? The rest of the book continues in the same vein. Woodrow Wilson's racism and segregation policies are omitted. For instance, while during his 1912 presidential campaign, Wilson promised fairness for blacks if elected, less than a month after his inauguration, his administration took the first steps towards segregating the federal service. (His wife Ellen was worried about black men's "sexuality" and "disease.") On the double-page spread for Franklin Roosevelt, Eleanor Roosevelt gets a small box as a "Groundbreaking First Lady." We learn that "Eleanor Roosevelt understood the social conditions of the Depression and became very active as First Lady...." Interesting that yet again the racism issue is avoided, since this first lady made "groundbreaking" strides in attacking racism. John Kennedy is lauded for the Cuban Missile Crisis, the Moon Quest, Civil Rights, and the tragedy of his assassination. But Kennedy was more interested in strengthening existing weak civil rights laws than passing new ones. Worst of all, he placated the southern senators by appointing federal judges in the South who were "acceptable" to them (read: racist and apt to enforce anti-black codes in the South, which is just what they did.) His active interventions in civil rights only occurred when accompanied by increasing instances of violence as Martin Luther King, Jr. ramped up his crusade for rights. George W. Bush also gets a two-page spread (generally reserved for the "greats"). The box on the Iraq invasion is interesting. It mentions that Bush justified the war by claims that Iraqi leader Saddam Hussein had weapons of mass destruction and connections to al-Qaida terrorists-almost all of which turned out to be false. Finally, only Clinton of all the presidents is called out for using the office to secure sexual favors. The author has also written "50 Ways to Detox Naturally" and "50 Natural Ways to Stay Young" inter alia . .