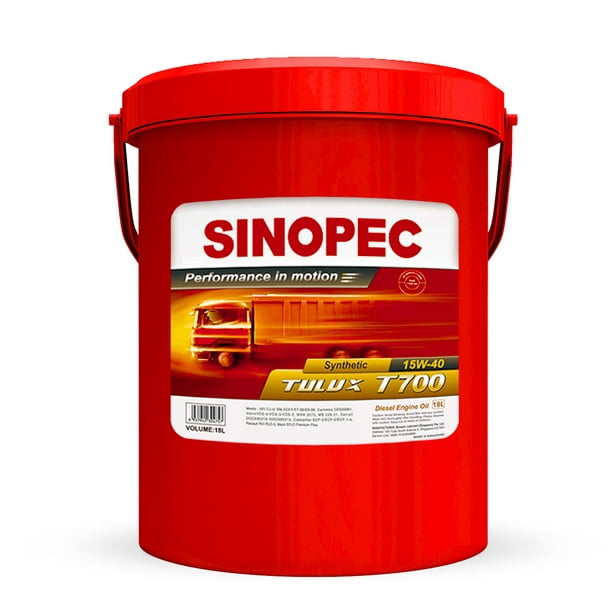 Pickup not available
Sold & shipped byWalmart
Gifting note:Ships in the manufacturer's original packaging, which may reveal the contents. Applications
Sinopec Tulux T700 15W-40 is suitable for use in:

The bucket come with 4,7 Gallons as described and work really good on Detroit engine does not working on CAT engines

Excellent oil much better than expected

I have to say this oil is really good suprisingly good much better than many higher priced oils I run it in my cars and diesel truck I have sent oil tests out at 10k miles the oil still super clean nearly same color as when put in my cars and passed all paramaters of new fresh oil so yeah this oil is very good. I will also state for diesel oil use I have noticed less soot caking in the oil versus many other diesel oil including non synthetic rotella oil and Delo 400 non synthetic so yeah this oil is very good also I have noticed engines are cleaner after using this oil and exhaust soot is less so the low ash statement is very true.

It's 15W40 full synthetic at a price that cannot be beat. It's rating meets new diesel engine requirements and I run it in all three of my Dodge cummins trucks.

Good oil, but NOTE it is NOT A FULL 5 GALLONS!

Like the title says, if you're expecting 5 gallons you won't get it. You'll be about a quart to 2 quarts shy of 5 gallons with ANY type of Sinopec oil. Which is dumb considering they use a 5 gallon bucket, why not fill it up all the way? Still, it's good oil (wish I could get it in 5 gallon buckets for GAS engines but walmart doesn't carry it) and cheap. I use this in my 03 and 04 dodge 5.9L cummins diesel engines and it works well. I can get around 10k miles out of this oil before oil analysis says I should change it (I do change the FILTER every 5000 miles however, just to be safe). Note that this is COMMERCIAL DUTY oil, used for semi trucks that run 500,000 miles or more a year, and those trucks typically use a 30,000 mile oil change interval (then again, they carry a HUGE amount of oil in those engines too). My cummins 5.9L takes 11 quarts and change, so unless you're popeye, you might want to dump that oil into one gallon antifreeze jugs or 5 quart car oil jugs before pouring it in, if you don't have a pump handy. But it's good oil and I know truckers that run it past 50,000 miles per oil change (think about it, lots of truckers pull a MILLION miles a year and their oil changed might take 20 or more gallons of oil, so a long lasting oil is a must (can you imagine the bill changing that much oil every WEEK if you're a cross country trucker running coast to coast if you used an automotive 3000/5000 mile oil change interval? The guy would go bankrupt!) SO for my money, this is good oil. And you get full synthetic for the price of Delvac 1300 conventional diesel oil. Up to you, but I run it and I've had zero problems with it and it cranks much easier than conventional oil in really cold weather too. Dave

It is Chinese full synthetic oil that has highest quality rating tested by API in USA. If API said that is in compliance with our standards. On the other hand it has bulk packaging with great price.