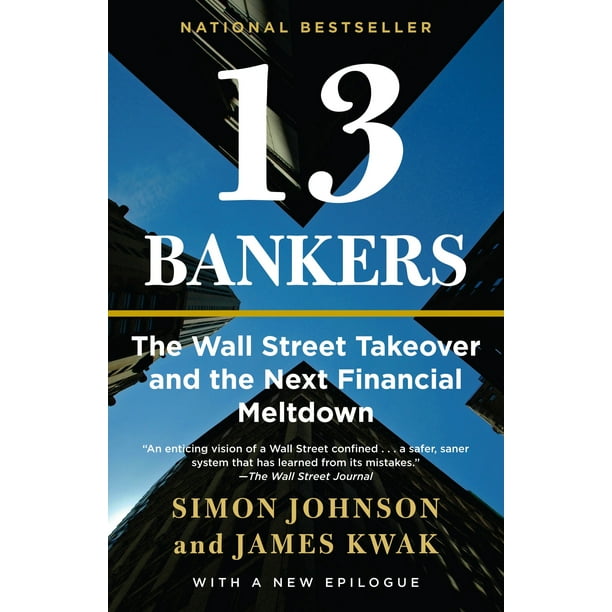 13 Bankers : The Wall Street Takeover and the Next Financial Meltdown

We aim to show you accurate product information. Manufacturers, suppliers and others provide what you see here, and we have not verified it.
Johnson and Kwak examine not only how Wall Street's ideology, wealth, and political power among policy makers in Washington led to the financial debacle of 2008, but also what the lessons learned portend for the future.In spite of its key role in creating the ruinous financial crisis of 2008, the American banking industry has grown bigger, more profitable, and more resistant to regulation than ever. Anchored by six megabanks whose assets amount to more than 60 percent of the country’s gross domestic product, this oligarchy proved it could first hold the global economy hostage and then use its political muscle to fight off meaningful reform. 13 Bankers brilliantly charts the rise to power of the financial sector and forcefully argues that we must break up the big banks if we want to avoid future financial catastrophes.

Updated, with additional analysis of the government’s recent attempt to reform the banking industry, this is a timely and expert account of our troubled political economy.

Another history of the...

Another history of the financial crisis, this one reaching back to the Jefferson/Hamilton dispute about the role of banking versus manufacture in the economy. The focus is tightest on ideological/material capture: Washington is dominated by Wall Street money, regulators who revolve in and out of the private sector they're supposed to regulate, and most significantly by Wall Street ideas. The failure of regulation and even reregulation after the crisis of 2008 wasn't simple corruption, but something harder to fight: true belief (that just happened to correspond to large potential paychecks) in the importance of not hampering financial firms with pesky regulations, while also ensuring that they wouldn't suffer from bad bets with a government backstop/bailout. The main takeaway: too big to fail is too big to exist. Amen to that; I just heard a paper where part of the argument was that size regulations are bad because there are theoretical circumstances under which big banks are efficient, and I didn't get to ask my question, which was "Who cares? Even if big banks weren't able to capture regulators, which they are and which means the 'efficiency' may just be that they can borrow money more cheaply than other banks because of the implicit government guarantee and distort markets, why does the possibility of greater efficiency justify ramping up the systemic risk?" Crony capitalism isn't just something we can tut-tut at other countries about, though the most bitterly funny part of the book is people like Geithner describing why "nationalize the banks, make the shareholders eat the losses and the creditors take haircuts" was good medicine for other people's economies but not for ours, that is, not for his friends.

As the title indicates...

As the title indicates, the book deals with the supply side of the current financial crisis. This is an good but not great book about the current financial crisis. The main flaw of the book is that it tries but only partially succeeds to mesh two stories. The first story is the rise of the financial oligarchy and its influence on Washington, DC. Wall Street has always had tremendous influence on and in Washington. A quick look at past treasury secretaries shows their Wall Street pedigrees. The authors' case is (not yet) backed up with sufficient data. I'd venture the idea that Wall Street's influence has grown mostly at the cost of other oligarchic industries (such as automotive, remember McNamara?). The dirty secret of US history is that the country has been run by an oligarchy since its inception. The foundling fathers were filthy rich (and didn't like to pay taxes for the common good). The poor and populist founding fathers like Thomas Paine and Samuel Adams were quickly pushed aside (and erased from history) by the planters, bankers and manufacturers. The control of Washington is the result of power struggles among different groups of oligarchies. The authors are on firmer ground regarding the methods of influence which they divide into campaign contributions, lobbying/human capital and cultural capital/ideas. The last element is the most pernicious: Masquerading as free market capitalism, crony capitalism has been established in the public mind set as the only alternative. The health care and stimulus debates illustrate perfectly how the American media and public are trained to disregard other solutions. It is an interesting question if regime change and winning the intellectual battle can be achieved without displacing the dead-enders currently occupying all important positions.It took 30 years for them to establish their hegemony ... Their second story is the evolution of banking in the United States from Jefferson/Hamilton to the robber barons to the Great Depression to today. While they provide some international context, I wonder how well the book will hold up against Reinhart's Eight Centuries of Financial Folly (which I have yet to read). Johnson and Kwak focus on the suppliers and the regulators. The buyers, however, play an important role too. From the Tulipmania onward, the presence of "dumb money" has been a key ingredient of financial bubbles and the crises that usually follow. Much of the dumb money of the current crisis was supplied by gullible European and Asian investors who stupidly believed that US rating agencies, US regulators and US investment banks cared about their integrity, their reputation and their long-term business prospects. Every crooked derivative deal needs a counterparty blind(ed) to the risks involved. Buyers complicitely ignored the spirit of the investment grade asset allocation rules. Concentrating solely on the sellers results in an incomplete picture. Overall, it is a good survey of how the deregulation happened. An awful lot of dismantling existing and not providing new regulation happened under the Clinton administration. During the Bush years, the last vestige of integrity and feelings of responsibility were disposed off too. Johnson and Kwak recommend better regulation (especially customer protection), stronger supervisors and breaking up the Too Big To Fail banks into smaller entities (which would still have been giants a few years ago. One key demonstration of this book is the concentration in the financial sector and its supporting industries such as auditing and rating). Proposals which should not be controversial in a sane world. Even a casual reader of the authors' blog will encounter that most of the book's content and message have already been discussed there. Buying the book is thus more a way of saying thank-you for their efforts to create a better America.