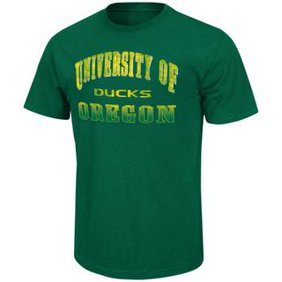 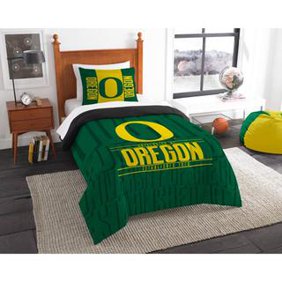 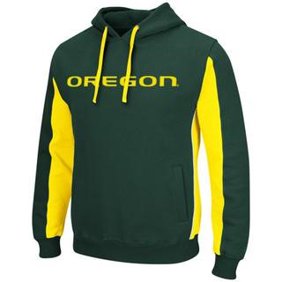 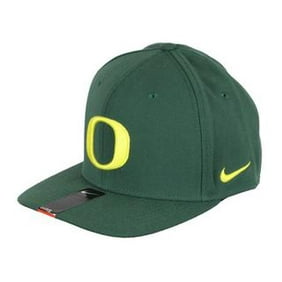 What images represent the Oregon Ducks?

The University of Oregon is represented by a number of different logos and images, including their famous duck mascot. Learn more about the specifics of each element of the Oregon Ducks' visual identity so you can be sure to purchase the right kind of merchandise.

Colors
School colors for the University of Oregon are green and yellow. Ducks merchandise typically makes use of several different shades of green, including a deep forest green and a lighter Kelly green. Typically, individual merchandise items will feature only one shade of green each. The yellow color is a bright, primary shade. Basic accent colors such as black and white may also be used.

Logo
The University of Oregon uses a simple logo featuring a capital letter O. The font used for the logo typically renders the O as longer than it is wide, with thinner lines at the top than at the sides. When displayed against a white background, the logo is typically printed in green, though other colors may be used against a green background.

Mascot
The Oregon Ducks mascot is a anthropomorphic, cartoonish duck whose original design was based on the Disney character Donald Duck. Some Duck mascot renderings look more like Donald than others, and some fans and students refer to the mascot as Donald Duck, though his official name is simply the duck. For many years, U of O had a special licensing agreement with Disney that restricted the ways in which they could use the mascot. Disney voluntarily ended this agreement in 2010, allowing U of O to use the drawing without restriction. Most drawings of the duck show him wearing a sailor-style hat that says "Oregon" across the front.

Other imagery
Some official Ducks merchandise features different visual representations of the UO duck mascot, including cartoonish duck feet. You may also see some Ducks merchandise with a stylized drawing of feathers that look a bit like small wings, typically arranged on either side of the O logo. This is a relatively modern design that differs from the cartoonish approach that Oregon Ducks merchandise typically takes toward duck imagery.

What Oregon Ducks merchandise is available?

If you're a big fan of the Ducks and you want to get as much green and yellow gear in your life as possible, you're in luck. There are a lot of different item types to choose from. You can either browse the full fan gear category or narrow down your product options with item-specific filters to create the right kind of shopping experience.

Clothing
You can outfit everyone in your family with head-to-toe Ducks merchandise if you want. From pajama pants to hoodies and fuzzy socks, there's no shortage of clothing available to show your support for UO. With so many options available, it might be useful to think about what particular items of clothing you need before you shop.

Accessories
There are many different categories of non-clothing Ducks gear available for fans, students and alumni. Some items are unusual, such as Ducks logo-printed duct tape, while others can be useful on game day, such as folding chairs in green and yellow. These items are a good choice for gifts when you know someone is a Ducks fan but aren't sure what clothing size they wear.

Limited edition and special event merchandise
You may be able to find some special merchandise items available for Ducks fans, including apparel that commemorates playoff game victories and the annual Civil War games between UO and Oregon State University. These special-edition products can be a particularly good gift-giving idea for Ducks fans. It's typically best to shop for these items around the time of a big game. For example, if you want to get the latest Civil War game merchandise, make sure you know when the game will take place. While the Civil War football game between the two schools is often the biggest draw, note that this title is applied to games between the two schools in other sports as well.