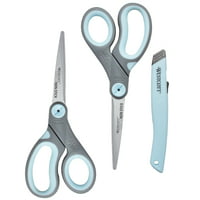 Although a pair of scissors and paper trimmers can be versatile, it's important to choose the right product type so you can get the most mileage out of your purchase. Learn more about the different features of these cutting tools so you can make an informed decision based on your classroom, home, crafting or office needs.

Whether you're helping kids cut out shapes from a worksheet or trying to make sure the edges on your DIY wedding invitations are presentable, it's best to choose the right cutting tool for a given job. That means you should understand the functional and structural differences between the various types of cutting tools so you can avoid issues while completing a project.

Scissors: As handheld cutting tools with two blades, scissors are meant to be manipulated with one hand using the thumb and fingers. In many cases, scissors are designed to be used while being held up rather than being held against a table. Their handheld design means you can use scissors to cut curves and a variety of other shapes, though larger blades may make it difficult to achieve a great level of detail. It can also be challenging to cut a perfectly straight line using a pair of scissors.

Paper trimmers: These tabletop cutting tools are the opposite of scissors in many ways. They typically use a single blade that moves upward and downward only, which makes them ideal for cutting a precise, straight line. However, that does mean that paper trimmers usually aren't suitable for cutting curves or other shapes that aren't straight lines. They generally consist of a large platform with an attached blade that's designed to sit on a tabletop. Paper trimmers may have limits on how many sheets of paper they can fit, so if you generally need to cut straight lines in large stacks of paper, you should look for a model that's designed for higher volume.

Craft knives: While not the most common cutting tool when looking for scissors and paper trimmers, you may see some craft knives bundled with other products, such as scissors. These knives usually have very sharp blades and thin handles that allow for precision cutting. This cutting typically takes place on a flat surface, and you may want to use a thick barrier like cardboard or a self-healing mat between what you're cutting and your work surface to avoid scratches from the knife pushing through the paper. The fact that craft knives are so sharp generally means they're not suitable for children to use.

Differences between adult and kid scissors

You may notice that some scissors are specifically labeled as adult or kids scissors. While older kids can use adult scissors, it's generally best for younger kids who are developing their hand-eye coordination to use scissors that are specifically made for them. This avoids frustration and helps them develop cutting skills properly.

There are a few different options for purchasing scissors. Make sure to read product descriptions carefully so you understand what you're buying.

Mobile apps
Walmart Services
Get to Know Us
Walmart.com
Customer Service
In The Spotlight
Shop Our Brands
© 2020 Walmart. All Rights Reserved. To ensure we are able to help you as best we can, please include your reference number: VOBDIHH0A2
Thank you for signing up!